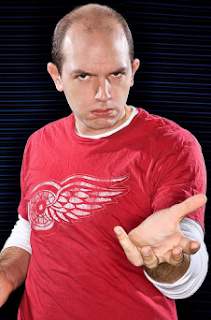 Get ready web followers and original content people: It was confirmed last week (Okay, I'm late) that comedian Paul Scheer will be hosting the 2nd Annual Streamy Awards on April 11th. The ceremony will stream live online at 5pm (PT) from the Orpheum Theater in Los Angeles at Streamys.com, Mashable.com and UStream.

Just add this to the pile of Scheer goodness. First, he's about to embark on a second season of FX's The League. He's also featured in HBO's Funny or Die Presents in the comedy short "Designated Driver". In March, he co-hosted the incredibly successful charity event for Haiti - Night of 140 Tweets, and as an uber Lost fan, lived out his dreams by moderating a panel of cast and crew at the Paley Festival in January. He's also a pretty damn awesome improviser who can always been seen at Upright Citizen Brigade in LA and New York.

Scheer is super funny, and already has a strong internet presence on Tumblr, Twitter and FunnyorDie.com. This promises to be an awesome presentation.

Congratulations, Paul!
Posted by TVBlogster at 9:47 AM

Email ThisBlogThis!Share to TwitterShare to FacebookShare to Pinterest
Labels: Paul Scheer, The Streamys