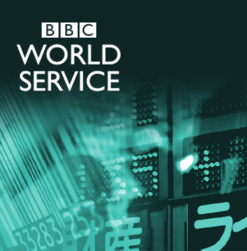 Remember short wave radio? Of course you don't. But, I do. Back in my post college days I was an anglophile comedy nerd lucky to have spent several years traveling back and forth from New York to London once or twice a year for long stays. Everything about Britain excited me: The pubs, the people, the comedians, the theater, the television, the literature, the caddy press, the politicians, the BBC, and the BBC World Service.

BBC World Service is available online today and is syndicated via NPR; however, once upon a time, radio nerds like me (who flipped the FM dial as a child to revel in 'Dr. Demento' and Alison Steele "The Nightbird") would subscribe to short wave radio magazines that listed international timetables and frequency charts to find far off world service radio stations around the planet. For me, the BBC World Service was my taste of what I was missing in London. Once I found the correct frequency on the dial at the right time, static silence switched to the haunting cathedral Bow Chimes ringing, indicating that the World Service was about to start. It was followed by short tones and a plummy voice stating, "This is London..." proceeded by the funny little jig music known as "Lillibolero". Suddenly, London was in my house, spilling the world news that was, and still is, the best produced and written journalism in the world. (Ok, next to the NYTimes.)

I was feeling nostalgic and came upon a YouTube video of various BBC World Service Radio Indents throughout the years. It has the chimes, the various tones, the goofy music and the tempered, crisp tones of broadcasters reading the news in perfect BBC English.

Some may want to gauge their eyes out at the boredom of this radio nerdism, but there are many idiots like me who get chills at sound of those church chimes and tones. Although some of the ID's sampled in the video are way before my time, there are moments that bring back the thrill of finding Auntie Beeb crackling from a little short wave tuner in the early hours of the morning - or the dead of night.

For the Poindexter nerdo that dwells inside, check out BBC Interval signals that were broadcast around the world, as sampled here.
Posted by TVBlogster at 9:17 AM