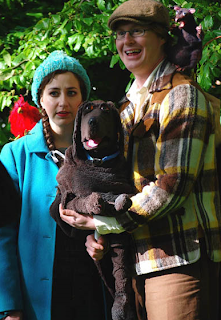 The fabulously hilarious Kristen Schaal (Flight of the Conchords) and Kurt Braunohler have made it to British television. Their web series Penelope Princess of Pets was made into a pilot and aired last night on BBC's Channel 4. The Mighty Boosh's Julian Barratt also starred as the dastardly MP. Why can't American television see the goodness that is Penelope? Come on, Comedy Central. You're putting Sarah Silverman on the bubble, now you're ignoring this lovely goofy show? Not cool. Those Brits are lucky.

Need the details? The trailer will provide:

Posted by TVBlogster at 1:13 PM