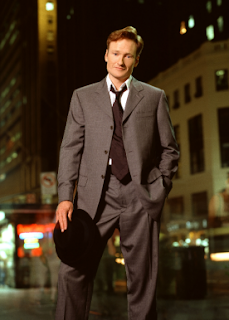 From Conan O'Brien on Twitter...."The good news: I will be doing a show on TBS starting in November! The bad news: I'll be playing Rudy on the all new Cosby Show"
The suspense is over. Conan O'Brien has signed on with TBS to produce a new late night show starting in November. The show will air at 11pm, pushing The George Lopez Show to 12midnight. This is stunning news considering that Fox was in heavy contention for snagging Conan, yet nary a word about TBS.

This may be another sign of things to come. Cable has emerged with quality programming rivaling network output tenfold. The Daily Show, Colbert Report, Mad Men, Breaking Bad, Damages, it's been proven that certain shows off the mainstream grid are grabbing hold of the public attention, carving out a very desirable niche in entertainment. It's going to be fun seeing a beloved personality like Conan take the leap from network to cable. He'll have more freedom to do what he wants, take comedy to a new level, and leave the creaky old network system in the dust. But one little thing: Conan will be up against Jon Stewart and Stephen Colbert. Worthy opponents. Bring it.

Source: NYTimes.com
Posted by TVBlogster at 10:44 AM