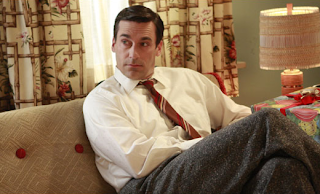 This weekend was saturated in "Mad Men". The very dapper Jon Hamm successfully hosted an edition of Saturday Night Live, where he and his "Mad Men" co-stars Elisabeth Moss and John Slattery dabbled in satirizing their beloved drama. Also, "Mad Men's" second season concluded in a powerful season finale on Sunday night.

"Meditations in an Emergency", the beat book of poems by Frank O'Hara, originally published in 1957, was featured in the season premiere. It's a slim book of rambling emotional free flowing thought on a man's personal quest to return to his own center. The book's mention set up a mirror to Don's struggle for his identity, the need to return to his true self, whether that is the roving Dick Whitman, or Don Draper, a man who will be left standing in the mire as the world crumbles around him. It is here where we found Don dealing with his mortality. A visit to the doctor warned of health risks and bad habits. He wasn't getting any younger, and that three pack a day habit wasn't helping.

He and the minions of Sterling Cooper dwelled in the middle of 1962, living in Camelot, waiting for the new space age, defining their roles in the social and professional mores of Madison Avenue, as the world found itself on the brink of a cultural explosion. Yet, last night's episode provided an intrusion on the day to day. The news was grim. The Cuban Missile Crisis was upon them. Kennedy worked to avert a national catastrophe. American's worst fear was at hand: A nuclear attack threatened. This was real.

"Meditations" is rehashed, this time as the title for last night's episode. We find all characters huddled in fear at the prospect of a nuclear attack at the hands of Fidel Castro. Meanwhile another invasion is brewing as Sterling Cooper is about to merge with a high power British advertising agency. The episode was explosive, as the fright of world decimation makes everyone face the reality of their own mortality. The confessions come. The truth begins to hatch.

Do confessions come about when one is on the brink of death? As bombs were pointed in the direction of these shores, there was personal redemption for most characters. In a tender and powerful scene, unforgetable in its grace and pain, the floodgates opened. Pete Campbell admitted his love to Peggy Olsen which in a confessional turn, inspired by Father Gill, Peggy admitted she gave birth to his baby. The crushing blow came in the words that followed, when she gently told him that when she gave the child away, she relinquished any love she may have held for Pete. The irony of their characters has always been devastating. Pete and his wife Trudy couldn't conceive, and adoption, a motion that appalled Pete, was a looming option. And then there's Peggy, the girl he loved and couldn't have, who unknowingly produced his child who was now lost...to adoption. The scene is like a delicate dream, hanging in the mind's eye, leaving the viewer breathless. Kartheiser and Moss shined in this lush exchange of superb acting. The result was stunning.

The center of the story of Mad Men of late has been the damaged marriage of Don and Betty. The glory of "Meditations" is Don's return home. He was indeed a "sight for sore eyes", as Joan uttered in relief. It was a homecoming, a welcome symbol of stability as we see Don walk through the doors of Sterling Cooper once again. But the mere sight of him at the stables, as Betty's pregnancy hung in the balance, was a moment of relief. No matter how liberated he was as the California sun soaked Dick Whitman, those Don Draper New York clothes maketh the man. It is here where Don and Betty's reconciliation has a modicum of hope. Her chilliness is tiresome, fearsome, and quite sad. Yes, Don was a cad in his relentless infidelities. Perhaps Betty's sexual dalliance with the handsome man in the bar will provide a buffer, allowing her the cushion of knowledge that if Don could be untrue, at least she is now even. As they deal with her pregnancy, we are still left in wonder as the bomb threat lessens. Now that they can go on living, what's next?