"Gavin and Stacy" and "The IT Crowd" 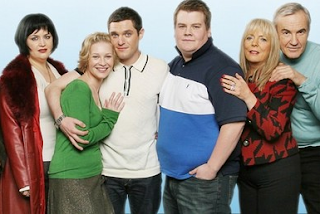 “Gavin and Stacy” has grown into a sensation on ’s BBC3. Written by Ruth Jones and James Cordon, who also star in the series as the best friends of the title characters, it explores the relationship of Gavin and Stacy, two co-workers from different office branches who fall in love over the phone. Many miles separate them: Gavin lives and works in , , and Stacy toils away in , . It explores how two people in love deal with the many miles that separate the family homes to which their heartstrings are attached. The lovebirds marry, much to the consternation of Smithy, Gavin’s life long friend (played by Corden), whose loves are lager, sports, more lager and food eaten while drinking lager. Smithy is a big giant baby who loves Gavin like a platonic lover, and grows jealous of any indication that he’s being ignored. Allison Steadman plays Pam, Gavin’s Mum. She’s a doting mother who loves a laugh, and enjoys a good fight, such as protesting the installation of a cell phone tower.

Stacy’s family in is equally emotional and loving. Her mother Gwen is a widow and a queen at making the best omlettes in the village. Her uncle Bryn is a lovely, corny man who is a surrogate father to Stacy, a good friend to Gwen, and keeps everyone’s chin up if the going gets rough. He’s perhaps the most poignant of characters. Uncle Bryn is the laughing clown with the broken heart, always sweet and loving, but shy about his sexuality, which he keeps as the worst kept secret in Barry. Comedian Rob Brydan portrays the sweet Uncle to perfection.

The sparks do fly, but not in your average sitcommy way. Gavin and Stacy start married life off by living with his parents. Stacy, now living far away from home, and having given up her job in Wales, is adrift in the home of a loving family, yet strangers. Gavin is at a loss, and cannot understand why she’s homesick when life in is a dream. Nevertheless, she’s young, never been away from home, feels lost and misses her mother and uncle. All is not rosy in the land of romance after all.

The humor of “Gavin and Stacy” is more human than in-you-face hilarity. Comedy is derived from human everyday interaction and the personality quirks of the family and friends who are part of their circle. Much like Smithy is best mates with Gavin, Stacy’s best friend is Nessa. A neighbor and confident to Stacy, Gwen and Bryn, Nessa is a hard bitten, biker chick who is unashamed of her life, past and present. And what a life. A former roadie, she’s bedded famous men far and wide. She’s live it, seen it, shagged it and lived to tell it all, only to come back home to , to which no high life can compare. The best friends, as mentioned before, are played by Cordon and Jones, who created and wrote the series. Their gentility and humanity woven into the story of these two love birds and the family/friend connection that ensues over long distance sparks lovely laughs. It may not knock your socks off, but these characters are approachable, relatable and will grow on you. The series finale airs tonight on BBC America, but as mentioned, it's available through downloads on iTunes. 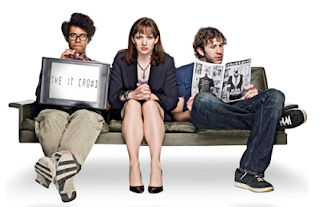 “The IT Crowd” (airing on IFC) is quite different than “Gavin and Stacy”. A three camera, in-studio lark, the show provides more laughs, with a leading line up of character outcasts in the IT department who are relegated to the bowels of the big corporate high rise building in which they work. Jen, who is the newly hired Director of Relationships, is placed down in the dark, dank basement with and Moss, two geeks of different natures. Moss is the straight laced nerd who is clueless about the world around him, yet knows how to wire devices that could probably make the whole building shake. is the slacker who tries to get on with the women and generally hates everyone in a suit. Jen is your average fashion loving, suited up maven, is freaked out by everything down in the dark, dusty computer grave yard in which she dwells, and is closest to the corporate world that hovers above them.

This show is quirky, surreal and yes, funny – but the highlight for me are guest appearances by Noel Fielding (“The Mighty Boosh”), who plays , the Goth ex-employee who lives behind a mysterious red door in the basement. He’s lovable, frightening and charming, but he creeps everyone out, and that adds up to hilarity.

I’ve more to see with this series. So far, it’s definitely worth checking out.

Email ThisBlogThis!Share to TwitterShare to FacebookShare to Pinterest
Labels: Gavin and Stacy, The IT Crowd