T'was the Wednesday Before Thursday...

...and all through my remote...not one thing interesting for a comedy TV fan, except maybe one of the last gasp episodes of "Pushing Daisies" (ABC - 8pm EST) before it's thrown into the dust bin of canceled shows, or perhaps "Ghost Hunters" (SciFi - 9pm EST) which is always good for a laugh. But nothing compares to Thursday night's NBC hour of power - 9pm - 10pm EST. So Thursday Eve is like waiting for Television Santa to bring us more Halpert and Beesly, Lemon and Donaghy. Must leave a plate of beets for Dwight and a meatball hero for Liz out on the mantel.

First part of those sixty minutes of comedy, drama and anticipation is "The Office". Episode is entitled: "The Surplus". Michael finds out that there is a $4,300 surplus of money in the budget, and the crew sets off to decide how they are going to spend it. Can it be? A trip to Schrute Farms? Hey! There's Mose! 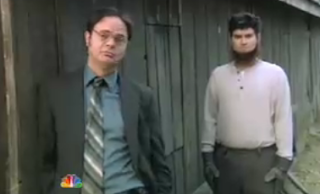 And...Pam giving Jim a sweet top lip kiss to Jim. Is Miss Beesly using her new powers of hotness to get her way with Halpert? Well, Jim was always putty in her hands, even before she found the curling iron that Roy hid from her during the frizzy hair years. 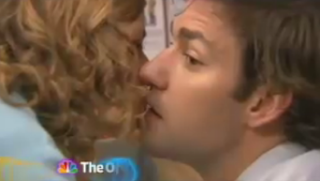 And the second half of the power hour of comedy is "30 Rock". Liz attends her high school class reunion, and Don Guiss wakes up from his coma, but instead of giving Jack the job of CEO, someone else is name. Dejected, Jack tags along with Liz at the reunion, and the zaniness ensues.

Apparently Liz (and Tina?) must have been a real dorky she-male back in the day because people are overly wow'd by her fabulous look in the screen shot below. Since Jezebel.com revealed some old photos of our Tina, it's obvious a little make over helped turn the lady with size twelve mommy jeans and Dorothy Hamill hair into the urban svelte goddess we all know. But didn't we all look like frumps in the early 90's? 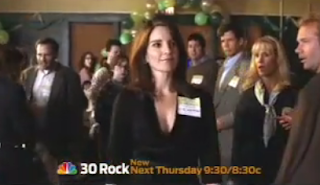 NBC's promos for Thursday, December 4th's prime time line up can be seen here.
Posted by TVBlogster at 6:04 AM