I've got to admit it. I'm not feeling it for "The Office" these days. It's like the light has been turned off. I'm no longer in love. This is actually a relief because my infatuation with this show has been tiring. It's just a television show, but the world of Dunder Mifflin drew me in like a vacuum. Their drudgery was my life. Jim was the guy that I always wanted to marry, and Pam was the girl I could understand, what with her lack of confidence, the kindness for others, the bite in her humor, and the pranks. The girl ruled.

However, characters are changing, the pacing is different, the fan boards are barking against people like me who think Ms. Beesly has become another person. Long time viewers are claiming this is the best season since season two, which dumbfounds me. It's been the opposite. The writers are suffering from fatigue and it feels like Ben Silverman is telling them to pump up the contrivance, pump up the silliness and pump up the volume of Pam's hair. "30 Rock" is now my drink of choice. No emotional attachment to characters, just plain zany fluff and fun with a dash of heart. But having said that, tomorrow is Thursday's hour of power comedy. Despite NBC's strange decision regarding Leno and the line up of daily talkshows, killing off hours of potential scripted television, "The Office" was the number one comedy of the week, gaining viewership and kicking butt in the 18-49 demographic. That's what matters. Not my bellyaching. 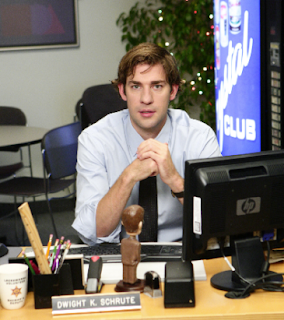 Tomorrow's episode of "The Office" is called Moroccan Christmas. As per the promos, Phyllis is decking the halls Moroccan style, testing Angela's patience as she ditches the tree and swipes baby Jesus into a drawer. Meredith suddenly combusts, her hair aflame. After all, what's Christmas without the annual Yule Meredith glowing by the tree? 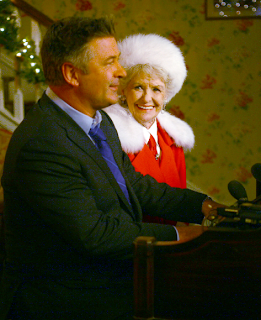 "30 Rock's" episode on Thursday is "Christmas Special". Liz's parents decide to go to a couples-only retreat for Christmas, leaving her alone for the holidays. To fill the loneliness, our gal Lemon participates in a children's charity. Jack Donaghy, trying to get the hell away from his overbearing mother Colleen has his plans foiled....again! The cast of TGS change their Christmas plans to prepare a big Holiday Special.

The amazing, fabulous, perfectly cast Elaine Stritch makes her usual guest appearance as Jack Donaghy's mother - all vinegar and spice and everthing sarcastic. Oh, how I love this woman!