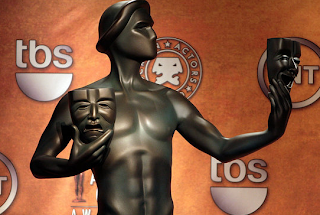 The awards season continues to bust out at the seams with more nominations announced byanother organization that enjoys giving the creatives a good pat on the back. This time the beleaguered and almost fractured Screen Actor's Guild announced their favorite people for 2008.

Again, this is a TV centric site, so I'm posting the TV hopefuls.

And the nominees are:
PRIMETIME TELEVISION

SAG Strike Talk...
As an admirer of good acting, and an empathizer for those struggling actors who are not in the top 1% notables in the guild, I hope SAG gets a fair deal. However, with the economy as it is today, I fear now is not the time to strike. But that is not for me to decide, nor is it my business. I'd just hate to see colleagues out of work during this very difficult time.

SAG is splitting into various factions: West Coast versus East Coast, and actors who don't want a strike, and actors who do. Cries that AFTRA is trying to absorb SAG into one melting pot run rampant. It's all a mess. Here are the petitions on both sides.
Posted by TVBlogster at 1:45 PM