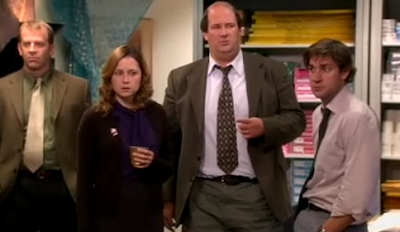 "Angela is sleeping with Dwight!" And the crowd is stunned. Phyllis is about to pull off the party of the year with ethnic flair while inflicting punishment on Angela for all her sins. Meredith's hair flamed like a flambe while wallowing in the buzz of Absinthe, other booze and Splenda , and intervention by the highly unqualified Michael sets the tone for last night's Christmas installment of The Office, "Moroccan Christmas.

This episode may not have enticed "Office" fans who are in favor of light hearted comedy, but for those of us who were dismayed by the silliness and out of character behavior of last week's Chair-Copier competition, it was a welcomed change. Not all Christmases need to be happy and bright. Although it was disturbing to see Meredith screech like a caged animal at the mention of her being an alcoholic, and have a fighting match with Michael at the rehab center, the cringe worthiness was in line with Gervais' dark vision of the original British show. Seeing Meredith's hair on fire was starling. Viewing Dwight hock a highly coveted doll to desperate Dads was evil and funny. Jim punking Dwight in the cold open was predictable, and didn't have the same bite as past pranks, however, those who hated this episode seemed to have loved seeing the old Jim/Dwight interaction. Include me on loving anything that involves Jim having a go at Dwight, but this prank felt familiar. (In season two he moved Dwight's desk to the men's room, making up a classic Halpert joke that to this day doesn't not get old).

Michael is clueless as ever as he rounds up the crowd for an intervention. He is clearly out of his depth. After years of seeing Meredith get out of control with alcohol, ultimately effecting her behavior (belly dancing and whirling like a dervish in last night's fare, and let's not forget season two's Christmas Party episode when she flashed Michael her boobs) to the point where the rest of the crew admits to her that she has a problem. Sadly, she's in denial. Alcoholism isnt' funny. It wasn't shown as funny here. The point of the humor is on Michael, his need to help people using television and dramas as his point of reference. When he applies knowledge he gained from "Intervention" on A&E or any other show he may have viewed, he finds that he's jumped into the deep end. The laughs are on him, not Meredith's condition.

It's great to have Toby back. Poor sorry sad sack Toby tries to impress his daughter by buying the highly prized unicorn doll, only to find out that Dwight sold the last one to Darryl. Begging to buy it off him, he unknowingly purchases an African American version.

The piece de resistance of the episode was the Phyllis/Angela dynamic which has been brewing ever since last season's "Goodbye Toby" finale when Mrs. Vance walked in on Martin and Schrute getting to business behind a desk. She held that secret over Angela's head, taunting her during various party planning, making Angela a slave. Angela thought Phyllis was a push over, but she pushed the wrong button. When the truth was announced to the unsuspecting group it was a surprise. We knew Phyllis had some devlish ways, but never this. I loved it. Call me evil, but I did. After years of Angela's bible thumping, critical judgements, snickering name calling (whore, hussy, office mattress, "I've seen the way you look at him" to Pam) it was karma time for Ms. Martin. The ending was heart wrenching, disturbing. Andy emerging from the breakroom as everyone knows Angela is boinking Dwight but him is sad, eliciting great sympathy for the guy. The group looks at Angela like the hussy she is as tears well in her eyes. Poor Andy. Too bad, Angela. Phyllis' actions may have been over the top to some, but for me it was retribution toward a woman who has been unfaithful to her fiance, and cold as stone to others.

Overall, it was like a eating a rich dark chocolate bar. Delicious, bitter, yet pleasing to the palate. After my disappointment with last week, to which I was in the minority (I swear I feel like either fans are forgetting the main point of this show and the characters, or I'm watching a different show), it was a fascinating bit of strangeness that may not reach the same heights of episodes past, but was indeed memorable. Indeed, it was also a nice break from Jim and Pam, whose relationship is one for celebration, but has been fraught with brief moments of angst and over the top boldness of a new Pam Beesly, whose improvement in character has made her an entirely different person. She seemed more in character here, but her talking head with Jim was so silly. Why does she need to feel she knew about the love triangle? In the past, Pam would have been joking and in shock with Jim, making an incredulous remark - not feel the need to prove she was right. I don't know where the writers are going with her. Her new assertion doesn't mean that she always has to prove her righteousness. Also, Jim's comment to Andy about "taking requests" while he played the sitar was a bit harsh, albeit chuckle worthy. In hindsight, after Angela and Dwight were outed, it seems even more jerky. So, perhaps the writers are making them less than perfect. Who knows? I'm tired of the future Halperts, and pushing them in the background was a relief. The fact it was a nice break makes me sad. They were compelling characters whose development has been a mixture of confusion (Pam), and wasted opportunity for growth in Jim.

Although The Office will not have new episodes until January, they are currently filming shows that continue into the New Year, culminating in the highly tauted one hour special after the Super Bowl on Sunday, February 1st.

Posted by TVBlogster at 6:57 AM