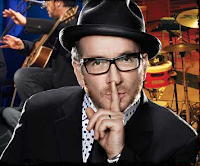 With the exception of "Later With Jools Holland" and the "Austin City Limits", music television with smart interview and performance is hard to come by these days. Elvis Costello, a legend in the world of post punk exploration, a chameleon in music style with a flair for humor and a gift for chat, has a been a ripe personality for the talk show picking. After being courted by various producers to head up his own talker, he's found his niche in “Spectacle: Elvis Costello With…” which premiered last night on The Sundance Channel with Sir Elton John as guest. It was a remarkable hour of in depth, honest discussion about the music that inspired both Sir Elton and Elvis alike, as well as the ways of the music industry, the power of image, the luck and the unsung heroes (such as Laura Nyro and David Ackles) who never reached the same height of fame, but were important influences to their own style. In this installment, Costello graciously lent his own common experiences with John for lively discussion with pitch perfect pacing and comfort in the role of interviewer. Indeed, Sir Elton, whose own gift of gab is legendary, was insightful, playful and meaningful. It’s probably the best interview I’ve ever seen with him, and I attribute this to Costello’s natural ability to drive good conversation. The intimate atmosphere between the talking heads and the audience is a pleasing concoction as well.

Musical performance and interview were interwoven throughout the hour with Costello sharing the stage with Sir John in a jam of various songs written by noteworthy personal influences. I presume Costello will join his musical guests in performance going forward.

Much like “Inside The Actor’s Studio”, Costello’s new show is funny, riveting and definitely a must see, must DVR kind of show. It’s interesting to note that “Spectacle” came to fruition thanks to David Furnish, Sir Elton’s partner. He approached Costello with a Canadian producer who envisioned the perfect show for the singer’s sensibilities and style. Elton also had an important role in championing the show, so producing him as first guest was a nice touch.

Other guests to grace Elvis’ stage will be President Bill Clinton, Norah Jones, Rufus Wainwright, The Police to name just a few. The schedule of shows and guest can be found on www.elviscostello.com/splash/.

“Spectacle: Elvis Costello With…airs on the Sundance Channel on Wednesdays at 9:00pm EST.

Posted by TVBlogster at 6:19 AM