"The Office: The Surplus": Team Copier! 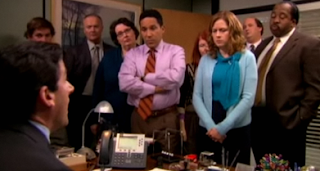 Put me in, Coach Halpert and Coach Martinez. I am firmly a member of your team. There is nothing worse than having to make last minute copies for a meeting, only to have the dumb copier jam or ripple your paper. I can deal with a less than stellar chair as long as it holds me up, but if my boss asks ten minutes before a meeting with the board for twenty stapled copies, and the Canon in the print room spits out nothing in defiance, I'll take one of those crappy chairs Pam keeps bitching about and throw it out over eighth avenue, past the stunt climbers who scale the walls of my office building, straight onto the rooftop of Port Authority, and don't think I won't. Ok, maybe I wont. But I'll have the burning desire.

Fandom on the internet is exploding with gushing love for this episode. I was bothered by this one.  In my view, last night's “The Surplus” was a weird and wooly offshoot of bizarre world that resembled its old self only in the office togetherness the copier-chair competition provided.  There were lots of strange, over the top moments that felt like The Office; however, this show will always feel different to me. I guess that's the after effects of Jim and Pam's gloriously uniting.  Or, perhaps it's just the writers, in their attempt to make Pam a new confident being in love with the man who gives her everything, are losing the concept of Pam's character, making her into a nagging, annoying anti-Pam.

Still there were some jolly times. With a $4,300 dollar surplus in the branch's budget, Michael announces the good news to the team at Dunder Mifflin that it’s theirs for the spending. They immediately split up into two factions: Team Copier - which consists of Oscar and Jim, who has avoided asking Pam to make copies for him since they've started dating, so he's had to toil over the crappy, hungry piece of hulking crap that calls itself a copier; and Team Chair - headed up by...what's this? Pam not playing on the same side of the team with Jim? Jim is thankfully not too badly whipped, and holds his ground.  The two separate factions kiss Michael's ass in ways close to prostitution in the minds of the DM drones, whose level of tolerance for Michael's thin skin and need for attention is ultra low to begin with.  Pam leads the comfy chair people, the team who needs to sink their butts into lumbar support while they answer phones, do crosswords and play Solitaire. She butters up Michael with a girly sexyness she never would have used back in the day since it humiliated her- a trait in which she held our sympathy and admiration.  Kiss that Pam goodbye.  I guess her sex appeal is the reward for "Fanciness".   Jim and Oscar make Michael feel like 'da man' by taking him out for lunch where Italian deserts are brought back as a Halpert peace offering to the viperess Ms. Beesly, who dumps it in a trash can.  Ef you, Pam.  Hey, Halpert, does Team Copier sell tee shirts? 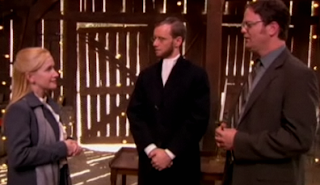 Meanwhile in the , Angela and Andy visit Dwight’s sprawling beet farm to plan their wedding. It’s the same story. Dwight is as proud as a rooster, clucking around his own farm, knowing that he still holds Angela since he’s still doing her behind Andy’s back. Andy – that sweet bozo face, that guileless, prone to anger man – is clueless. It’s to a point where I actually hate Dwight and Angela. There is no compassion culled for these two as Dwight snickers behind Andy’s back while Angela sneaks over to the Schrute barn for sex at night. But I digress. The sneaky wedding by Dwight, which ran Angela firmly into the arms of Andy in broad office daylight, was way too over the top for my taste. The best part of the whole scenario was the German Amish Reverend. He was cute, and so “There Will Be Blood-ish” with his puritan aura. 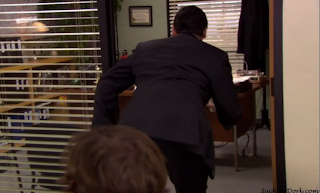 Michael was on his game. Can Carell do no wrong? What about that ass dance out the door? The need to ask Hank the security guard for his opinion, only to throw him out when he took his sweet time to figure things out? All were joyfully funny. Oscar is gaining new ground as a prominent player in this show, and I love it. He adds rational thought to Michael’s childish view with exasperation and subtle humor. May Oscar find that man of his dreams. He was too good for Gil.

Ok, back to Pam. Can someone please let me know what happened to her? She left for back in September (or in Dunder Mifflin world - July), and this other person who calls herself Pam came back and became a thoroughly annoying bitch. 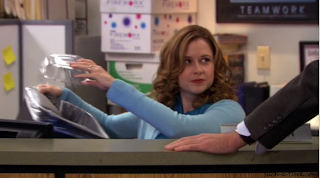 This isn’t Pam. I’m sorry fan sites who snark over fans like me who don’t enjoy this new incarnation. This isn’t the Pam I had hoped to see. I’m not a staunch feminist, but I found it distasteful for her to claim that “Since I’ve been here, I’ve had two engagement rings and only one chair”, implying that she’s bagged two men giving them the sexy frizzy haired, understated Pam charm, but can’t get a damn new chair. So new sexy Beesly, fresh from the hot streets of NYC, juts out her boobage,  jujjes up her hair and paints on the lipstick to use what the good Lord gave her to get her way. Wow. That was hilarious to everyone, I bet. Not to me. It negated all the pain Pam went through all those years of covering herself with cardigans and blouses, skirting old man glares from Creed, off color remarks from Michael and boob jokes, only to tart herself up to get her way…to get CHAIRS. The fact that it didn’t specifically work was good comedy, but it came with a bad taste. Shouting for Michael to “show his ass” didn’t ring true with me. I hear a chorus of "lighten ups" and eyerolls from the internet. But I don't care. But to quote the Pam I used to love, "I am what I am....that's Popeye". 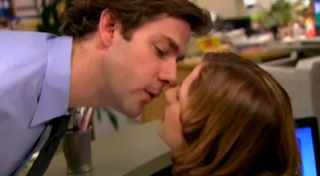 The final scene worked for me. Not only was Jim's kiss extremely hot, it upped the ante, and Pam will enjoy a lovely afternoon trying to copy four collated stapled sets, which should take twenty seconds on a new copier, but will take her at least an hour on this useless husk of a machine. Enjoy your new chair, Pam!

Can someone explain how the chairs won out?


I love competition in sports, but my tolerance for competitive sitcom scenarios with known allies suddenly pitted against each other is really low. I’m even bothered during episodes of “I Love Lucy” when the Mertz’s and the Ricardo’s fight, so I’m pretty bad with going with the flow on this storyline.

Next week’s episode is “Moroccan Christmas”. Apparently Meredith’s hair goes up in flames. Oh Jeebus have mercy on your birthday.

Photos courtesy of www.such-a-dork.com. (Thank You!)
Posted by TVBlogster at 11:30 AM