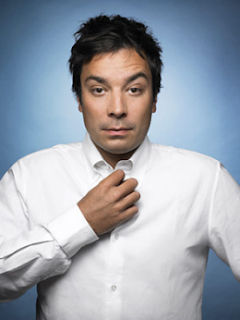 When Jimmy Fallon was announced as the "Late Night" successor to Conan O'Brien earlier this year, eyebrows furrowed and a chorus of "Huh?" spread out across the land like wild fire. His name had been bandied about as a possible replacement for O'Brien, but once it was confirmed, there were cries of despair. Was he up to the task? Would he be talkshow host material? Would viewers who found him annoying be won over?

It also confirmed what was now the inevitable to "Late Night" fans - especially those of us who dwell in New York: Conan is leaving us for Hollywood. The east coast boy is going out west, replacing Jay Leno, the top rated host of the top rated "Tonight Show". It was painful. Maybe I'm just jealous. I wish Executive Producer Jeff Ross would remember me from all those years ago at Broadway Video, hire me, and take me along. But either way, it's going to be hard to see Conan replaced by anyone, much less Fallon.

I'd like to see what Jimmy can do. Expectations on his debut are fraught with doubt, but that's nothing new. When Conan was announced as Letterman's replacement back in 1993, he was a total unknown entity. A comedy writer for the Simpsons and SNL, he would occasionally appear as a background character on the Saturday show. His first few years of hosting "Late Night" were a constant wait and see experiment. O'Brien's toe touched the line of failure many times, with one sharp move surely to send him over the edge into cancelation; yet, as cooler heads prevailed, allowing his style and humor to take root and build a following, he claimed his stake in the talk show landscape. A whole generation of college students and comedy fans grew up laughing with O'Brien despite his rough start. So, you never know what time and patience by the network and fans will bring to Fallon.

The dye is already cast: Fallon is behind the scenes ramping up for his new hosting duties, which will begin on NBC March 2nd. NBC .com will be getting him started with a video blog starting tonight at 12:30am, (www.latenightwithjimmyfallon.com). It will provide a behind the scenes look into the new Late Night, providing Fallon with a virtual introduction process, giving viewers a taste of his style, and what to expect. He does have some big shoes to fill, but he has to start somewhere. I'm kind of rooting for Jimmy, but I'm really going to miss Conan. Badly. It won't be the same without him on "Late Night", and seeing him on "The Tonight Show" won't make that any better.
Posted by TVBlogster at 11:12 AM