"Arrested Development" Movie Has Been Unleashed From the Chains of Cera 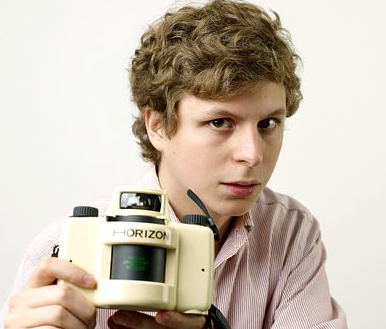 Hey, Michael Cera! I'm looking at you. Yes you. Put that fugly camera down.

The Arrested Development Movie has now been officially green lit. The last piece of of the casting puzzle has finally agreed to be in the flick. Michael Cera, the young'n who played the lovable and sweet George Michael Bluth, now big star of Juno and Superbad, was the one hold out. The entire cast of well seasoned, hilarious, talented actors, such as Jessica Walter, Jeffrey Tambor, Jason Bateman, Portia de Rossi, and...be still my laughing heart...Will Arnett, were all willing and ready to reprise their now classic roles, only to be held up by Cera's hesitation to join. However, Co-Executive Producer and narrator Ron Howard did spill the beans during the Oscar red carpet chats just by saying that yes, the film was a definite go as his eyes glowed with happiness. It seems that Cera finally came to his senses, realized what a fantastic opportunity it would be to work with this awesome group of funny actors, and decided to become George Michael once again - this time on the big screen.

Well, it's about time, Cera. All this too-cool-for-the-room snarkiness was growing old. The "you can always watch all three seasons on DVD" was getting way past lame. Know the hand that fed you. Don't bite it. But having said that - thank you for finally seeing the light. Putting the dysfunctionally funny Bluth family in cinemas will be awesome with cheese on a bun. More GOB magic tricks! 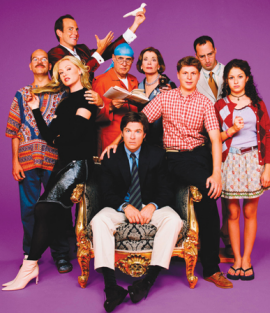 Gratuitous photo of the cast I love...

Posted by TVBlogster at 9:57 AM

Hooray! My husband and I totally loved this show! We hoped and hoped for it to make it on TV, and were so bummed when it got canceled. I hope the movie can live up to the wonderfulness that was the TV show.