Flight of the Conchords and The Office 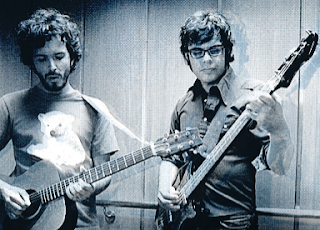 I've been in the midst of moving house hell, devoid of all brain power to write, explore television on the internet or keep up with the show biz joneses. However, as things settle, I am back with a posting on my boys - Bret and Jemaine - who've been rocking the party for a few weeks now - with not one jot of written discussion by me. Damn that move! It sapped me.

After a quiet season two premiere episode, entitled "A Good Opportunity" where we see Murray living in the flickering embers of managing one hit wonders and plagerists The Crazy Dogggzz as the boys go it alone in a toothpaste advertisement, the show picked up the pace. In "The New Cup", Flight of the Conchords suffered as a $2.49 mug purchase crashed the household budget, forcing our friendly Kiwees to become rent boys - which also failed. In last week's "The Tough Brets", Bret starts his own gang of local neighborhood thugs which comprised of an old guy, an angry Asian middle aged couple and Dave. In a send up of West Side Story, they kicked some butt on the ever mother lovin' street with intimidating dance and song. Last night's "Murray Takes it to the Next Level", guest star Jim Gaffigan appears as the ever inquisitive friend of Murray, who follows the rules of friendship to a tee, rating very high on his pal's friendship chart, peaking well above Jemaine and Bret whose flow chart arrows have peaks and valleys to Jim's high flying lines.

McKenzie and Clement have encapsulated running themes through each season thus far. Season one saw the boys trying to make it big while picking up chicks. Their songs were of longing for women, being a horny "Boom King", prancing as the "Prince of Parties" while begging off the mythical bevvy of babes in "A Kiss is Not a Contract". This year, the running thread appears to be the harsh realities of the artist's struggle of living dirt poor in New York. Ladies have been pushed into the background thus far, giving room for more hardship stories, making the guys more endearing and sympathetic, if not just as hilarious. The songs are plentiful and generous to the other characters. We've reached episode four of season two and each of the primary characters - Mel, Murray, Dave, Gene the Landlord, Greg the Consulate Assistant and even Doug - have had a song or a line to sing. After the long writer's strike, which pushed back production and thus the airing of Flight of the Conchords season two, all this dry witted comedy and the eclectic mix of music from Bret and Jemaine's brains (with c0-producer and write James Bobin in the mix) is a sight for sore eyes on Sunday nights on HBO at 10pm. 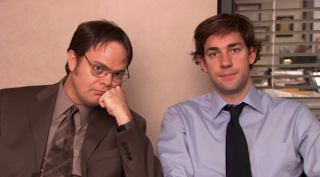 I could watch Jim and Dwight for hours. Their frenemy relationship, their brotherly annoyance is a dynamic that has been missing from the show for a while now. But it returned in last Thursday's episode of The Office with part one of a two parter called "Lecture Circuit". This installment was absolutely, and very happily amazingly, funny, old school classic Office, the likes not seen since earlier this season in "Weight Loss". Oh, there were shades of it in "Customer Survey" and "Business Trip", but this episode was pitch perfect, hitting the nail on the old Dunder Mifflin head.

Starting from the funny cold opening, that had Michael find out about a P.A. feature to his phone that had him announcing idiotic drivel to the troops, ending with Jim cleverly distracting him while cutting the cable, to Pam and Michael on the road, spreading the Scott wisdom upon unsuspecting and uninterested branches, to the party planning committee, now a gang of two in Jim and Dwight who are so pissed they've been assigned this dumb ass task, and so unprepared for the responsibility, they forget Kelly's birthday - which is obviously the biggest no-no you can face in this place. Miss Kapoor is out of luck because Dwight can barely blow up a balloon, and Jim couldn't give a shit.

As the birthday fiasco is hashed out by two salesmen who could give a crap about event planning, Pam is driving Michael to Utica - first stop on that whirlwind whistle stop tour of branches in need of sales religion. 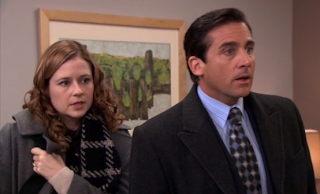 It's great to see Pam back to being herself, but with the dose of confidence earned through her years of growth and time in New York. I was worried about her being uncharacteristically aggressive in other episodes, since standing up for herself was easily mistaken for whining and ranting while fighting petty battles. However, Pam's encounter with the post-Jim Karen fared better than Jim's meet up back in season four in "Branch Wars". When faced with the ex-girlfriend he dumped next to a fountain in NYC the spring before, Jim hemmed and hawed through the big foot he stuck in his mouth not able to articulate much unless it was about Pam or the traffic he had to fight getting back home. Miss Beesly, on the other hand, wanted to make sure Karen didn't hate her, and had the strength to face what could have been a nasty little situation with ease. Pam doesn't want enemies out there - not even Al Quaeda - and who could blame her? 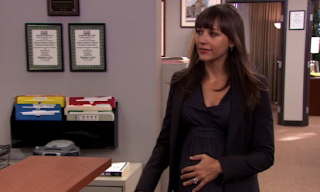 How fabulous was it to see Karen pregnant and married and happy? Although I was always Team Pam, I adore Rashida Jones and really cared about Karen since I've been in her shoes, and knew she'd get hurt in the end. Her happiness was my hope for her character. Her professionalism is solid as she takes Michael in stride. Also, when hearing of Pam's engagement to Jim, the reaction was satisfying. Hugging Pam with warmth, if not slight awkwardness, confirming that there is no hard feelings, and that she has moved on, was the definitive high road. The closure Pam received from this experience was the right way to end the Karen story, comforted in the knowledge that the lady in Utica has found contentment and isn't beaming psychic death stares in the direction of Scranton, PA.

Michael, thinking about the concept of closure, realizes he never had it with Holly. New Pam, as sweet and bold as ever, encourages Michael to ditch the Rochester branch and set sail for Nashua, where his long lost Holly now works. It's all steam ahead for closure...but will Holly be there? This was a smart cliff hanger ending a terrific part one with anticipation for a heart warming/wrenching and hopefully funny conclusion.

Part 2 of "Lecture Circuit" will air on Thursday on NBC at 9:00pm EST, where we'll see if Holly shows up, and if Jim and Dwight are still alive at the hands of Kelly when they throw this lame ass party in which they want no part. 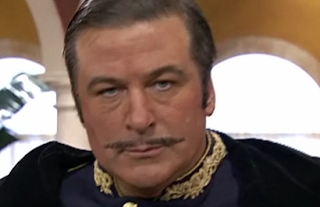 ...the beauteous Jon Hamm cranked it up a notch as Liz Lemon's neighbor and ice cream loving, chocolate fondue eating object of desire. 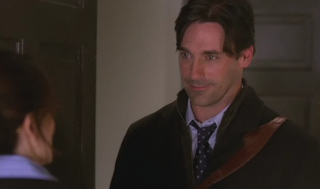 Jon Hamm is swoon-able. I mean...look at that screen shot! To see him let loose the Don Draper for a while and get down to the Dr. Andrew Baird was like wallowing through a lovely Vicodin-like cottony dream.

More Jon Hamm plus Selma Hayek to come in upcoming episodes. And in act of unbridled unprofessional blogging, I'm too tired to write more - so watch the episode here if you haven't seen it already.

If you DVR'd it and haven't watched yet - what are you waiting for?
Photos courtesy of www.such-a-dork.com and hbo.com.
Posted by TVBlogster at 6:48 AM

Email ThisBlogThis!Share to TwitterShare to FacebookShare to Pinterest
Labels: Flight of the Conchords, The Office