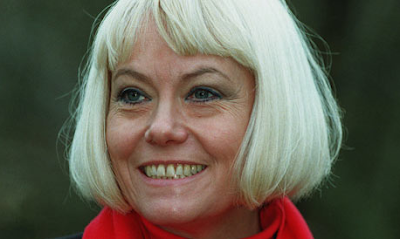 Wendy Richards, star of Are You Being Served and Eastenders as well as British Carry On films, passed away yesterday at the age of 65 after a long battle with breast cancer.

Wendy Richards was a sparkling, underrated talent in this country; yet, for those of us who have known and enjoyed her work, she held a very special place in our television cult hearts. Her portrayal of the great British working class heroine was filled with dignity, humor and nice dose of salt. It was hard not to admire her and her fine body of work.

Back in 1992, I was living off the Edgeware Road in London for a few months, soaking in the UK life on a few severance checks from old jobs. Along Crawford Avenue, a quiet residential respite away from the bustle of Edgeware, I saw the long white blond banged hair of Richards from a distance. She was walking her dog. Now, I've seen plenty of celebrities. I've worked with some, and have supported many people known in the public eye; however, seeing a famous British television star was exotic. Some British actors are only known in cult-like PBS viewing Anglo loving circles. When you see a person who has enlivened ficitional beings on a funny soap or drama from Blighty, their image is as foreign as the soil in which they live. It's one thing to see David Letterman or perhaps Tom Cruise walking down the street. Their wow factor is obvious. But to see a famous Brit who could turn nary a head on the streets of Manhattan, is a pleasant and heart warming surprise - as if they are part of a secret society of people you know and admire - but no one else in your world has a clue. (Perhaps that is why Hugh Laurie's fame is so wonderful yet weird to me. He's now known by all in the mainstream USA celebrity machine when he was once my little hero on Black Adder and A Bit of Fry and Laurie.)

Nevertheless it was a thrill seeing the lady who portrayed Miss Brahms and then later the vinegar filled yet good hearted Pauline Fowler walking her little dog on an overcast afternoon in London.

Fun fact: Richards was also in the Beatles movie Help!, but her scenes ended up on the cutting room floor. She made up for that in spades.

Sources : NYTimes, BBC
Posted by TVBlogster at 9:30 AM