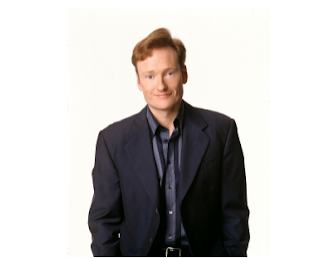 So, this is it. Tomorrow night will see the last show of Late Night with Conan O'Brien before our easily sunburned jester will be taking his laughs and boarding a flight to Los Angeles for good. I don't want him to go. Taking our east coast funnyman away to already production heavy Los Angeles is rough. Conan has roved through every inch of gritty, hip, yet real Manhattan for hilarious bits and remote segments. I don't need to see him do the same in the sunbaked streets of L.A.

The challenges he has to face are daunting. He will continue to follow Leno, with a time shift that will test his comedic mettle. Entertaining an earlier audience whose comedy sensibilities might not jive with Conan's quirkiness will be a challenge he'll face. Also, fighting for guests in Los Angeles with Kimmel and Leno will be a tough battle.

I hope Conan all the best, but I doubt I will be able to bring myself to watch him. As much as I hope Jimmy Fallon succeeds with his own following, I may have to give a pass. It looks like Letterman will be my late night show of choice, once again; yet, sadly, he has lost his edge over the years, so perhaps not.

Tomorrow night's last stand in Studio 6A will mark the end of an era. The show will go dark and be taken over by a Lorne Michaels' favored comedian in the studio across the hall. Conan will take up residence in a brand new sound stage on the Universal lot. And here we are, with a new late night television landscape, where scripted television have been scaled back, and a sudden dearth of low cost talk shows are spread out before us like a buffet.

I wish Conan good luck, eventhough I will be keeping my distance with the new Tonight Show for a while after it premeires.

In tribute, here are some of my favorite Conan bits over the years:

Posted by TVBlogster at 6:52 AM