What I Won't Be Watching 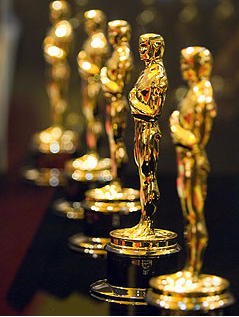 The Oscars will be on ABC Sunday Night, and I will be avoiding it all: the red carpet, the ceremony, the self satisfying grins, the boring gowns, and host Hugh Jackman doing high kicks in a dance number. I will have no interest in seeing these things.

I am also not interested in seeing Kate Winslet win an award, only to have to see her re-enact her sappy, tear filled, time halting speech at the Golden Globes which turned into two speeches after she won Best Actress for one of those two films she gave the world this past year. Nor will I see the solemn faces of Hollywood as they see Heath Ledger win his award posthumously. I am also not interested in the feel good Bollywood film of the year, which could very well win Best Picture. It was very nice, but not all that. It was a weak year for film, although there were a few good ones such as Doubt, which has multiple Best Actor/Actress awards for acting, but not for Best Picture. Shame. The film was an absorbing, thought provoking experience.

No red carpet for me. There is no desire to even see the best and worse dressed the day after on WireImage or in People. No. I will be watching Flight of the Conchords on HBO, and keeping myself occupied with other Sunday night distractions, but no Oscars for me.
Posted by TVBlogster at 6:44 PM