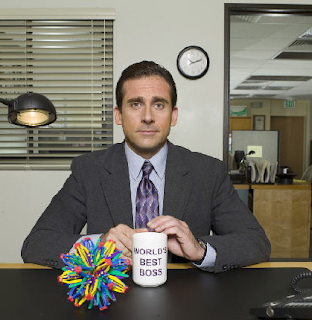 The second half of season five's Office is heating up with more mystery. Kobi from Zap2it.com reports that a big storyline regarding Michael Scott and the new corporate head honcho, played by The Wire's Idris Elba, might see our favorite boss of dorkidom walk out of the Scranton branch in a "Jerry Maguire moment" while another faithful employee follows him out the door in solidarity. Who could it be? Jim? Andy? Not Pam...no more Pam-lessness at Reception, please! My first guess was Dwight, but wouldn't that be too obvious? Whatever the outcome may be, fan sites are abuzz. Since this episode could possibly be the one called "Two Weeks Notice", and is scheduled for later in the spring, there will be plenty of time to speculate and ring our hands over the possibility of losing the Regional Manager of Dunder Mifflin until the corporate office comes to its senses - or Elba's character leaves. He is only signed on for six episodes. However, a Scranton branch without Michael could Scooch Jim to the number one position. Could this give us the Halpert character growth we all hoped to see? Unless...Jim is the one that follows Michael out the door, that's another open ended question.

The next new episode entitled "Blood Drive" will air on March 5th. It's Valentines Day in March! What will cupid, ever late as can be with his holiday episode (thanks NBC) provide? Jim and Pam PDA, which will lead to their banishment from the office for the day. Lets hope it's hot, sexy PDA, because fans such as myself are waiting for some Halpert/Beesly deep smooching. The future Halperts have lunch with the present day Vances of Vance Refridgeration. Michael finds a mysterious love interest at the office Blood Drive. Dwight and Kevin pair up with some ladies at a Lonely Hearts party. Angela splits an atom and re-recreates nuclear fusion using cat fur and yarn, while Oscar finds the cure for infertiliy. What? Forget the last part.

Remember when these stories were simple? "The Dundies" in season two was just that - an office awards ceremony with subtle situations among the staff. "Office Olympics" was just that - a way for the staff to pass the time while the boss was out closing on his condo. "The Injury" was all about Michael's injury, and the concussion Dwight incurred while trying to go "rescue" him. All quiet, funny, deeply satisfying stories without extra layers of drama, over the top comedy or new plot lines. I fear all this office search for romance among the second tier characters getting tired. But I hold out hope that they'll provide me wrong.

Oh dear, and am dire on a Friday aren't I? Again - I love this show, and only want it to be back on track.
Posted by TVBlogster at 11:10 AM