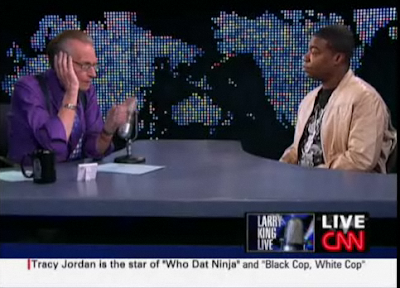 If you tuned into 30 Rock last night, and thought you had joined the Crypt Keeper Hour, with guest Tracy Morgan, you were mistaken. It was just another hilariously odd episode of the Tina Fey show with Larry King playing himself. There was also another installment of Selma Hayek portraying Jack's paramour Elisa. Lest there should be an overload of stunt casting, Jon Hamm wasn't in this one, causing me a tinge of sadness, yet a very nice mention by Liz that she has had sex two more times in 2009 than currently sexless Jack. If we count backwards to all the lovers she's had this past month - that would be zero plus one equals Dr. Baird. So, hats off to you, Liz Lemon, for getting laid by your gorgeous doctor boyfriend and having him take boobie shots of you before the first quarter ends. Kudos.

However, all is not rosey in Liz Land. Her iPhone - the most ubiquitously featured bit of product placement on the show these days - was left in a taxi, and is being held hostage by the driver for $2,000. It's either the money or the picture of Lemon boobage that lives in its hard drive will be spread across Livery cabs from borough to borough like that maple syrup smell from Jersey.

Meanwhile, the economic crisis explodes while Tracy is chatting it up with Larry. Jack is trying to keep Elisa from going off to Puerto Rico while juggling his need for sex, love and his need for greed as GE takes the brunt of the economic freakout. Also, the incredible and sorely missed Pete Hornberger tries to find some money that Tracy has told America he has hidden in a special place in 30 Rock that is hard on top, soft on the bottom but moves everywhere. That place was Kenneth's Page jacket - which came in handy when he helped pay off the ransom for the iPhone. Now Liz's boobs ("for once, the were pointing in the right direction!") will not be posted on the Fairway Billboard on the West Side Highway.

Hilarious episode as always. Since the story between Jack and Elisa appears to have ended (or put on hold), I'll miss Selma. Some bloggers weren't thrilled with her acting style, but I enjoyed the Baldwin/Hayek interaction. She brought out his warmth.

Also major props to Maulik Pancholy, who plays Jack's secretary Jonathan. His turn as the infatuated second hand man with a boy crush was and is always incredibly funny. Watching him play flute shirtless on tape in last night's episode was horrifyingly hysterical.

Now, lets bring back Jon Hamm for the ladies, please.
Posted by TVBlogster at 10:46 AM