Michael and Michael Have Issues Premieres on Wednesday 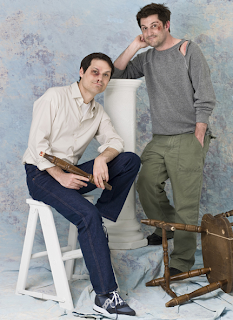 After a flurry of emotionally charged Twitter tweets between Michael and Michael, after verbal battles with guest stars, including some possible pornographic situations where dignity was trashed, after time away from their kids, family and cats, Michael and Michael Have Issues is finally set to premiere on Wednesday at 10:30pm ET on Comedy Central. It's been a while since Showalter and Black have tip toed through the tulips of sketch comedy together as a team, so anticipating their show done partly before a live audience with some live action bits, is a pretty damn fine summer treat. I can't believe it's almost here. The build up to broadcast has been killing this lowly unread TV blogger. (I have issues too.)

Here's some Michael and Michael reading:

Time Out - Black and Showalter on Their New Show

New York Times - Friends Who Wish Each Other The Worst

And speaking of a Michael... 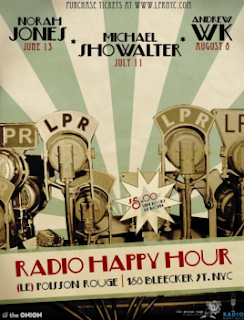 I spent an mimosa soaked Saturday afternoon brunching in the audience of Radio Happy Hour at Le Poisson Rouge down on Bleeker, basking in the sight of Michael Showalter and a cast of vocal characters.

Radio Happy Hour is a newly minted monthly "old timesy" radio show (performed for podcast) done in the style of Hee Haw and Prairie Home Companion meshed into a comedic goofy mix. Special guests are invited to partake in interviews and scripted tongue in cheek dramas that are dirty, corny and just stupid fun. Norah Jones guested in June, Showalter was the July feature and Andrew WK will participate in August. More future guests should be announced soon. Showalter promoted M&M Have Issues, chatted about how his middle name is "English", discussed his professorial work at NYU's Film School and mentioned the big party blow out at The Bell House in Brooklyn on Wednesday night at 8pm before M&M broadcasts its maiden episode.

You can listen to Radio Happy Hour on their site and on iTunes. As of this writing, Saturday's Showalter show hasn't been uploaded, but if anyone is reading this - keep checking the links.
Posted by TVBlogster at 8:17 AM

Email ThisBlogThis!Share to TwitterShare to FacebookShare to Pinterest
Labels: Michael and Michael Have Issues