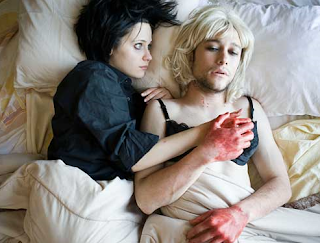 Earlier this year, Zune (Microsoft's music service) partnered with Mean Magazine to produce original episodic video shorts of comedic re-enactments of popular movies of the past. Last week, I posted a video short parody of the 1991 feature Point Break, that originally starred Patrick Swayze, Keanu Reeves and Gary Busey, and was re-made by the very funny members of Human Giant and Reno 911.

Through the magic of comedy.... 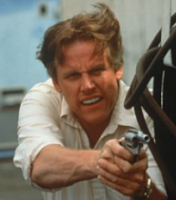 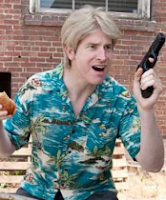 Film parodies also include funny remakes of Tron with Cheech and Chong, Carrie with Will Arnett, and Dirty Dancing with Charlene Yi (soon to appear in the highly anticipated indie Paper Heart) and Channing Tatum. They are all available at MSN's Cinemash site.

One film reinvented as parody that I favor is Sid and Nancy. Zooey Deschanel and Joseph Gordon-Levitt (pictured above) do a bent version of the first couple of punk. See it here.

Cinemash Photos by James Gooding
Posted by TVBlogster at 12:05 PM