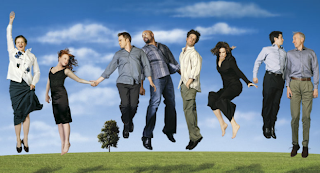 Created and produced by Alan Ball, Six Feet Under aired for five seasons on HBO. It held many profound themes, chief amongst them being the view that death need not only be an end, but can be a indication of a new a beginning. This was immediately established in the premiere episode when the patriarch of the Fisher family met his demise suddenly, violently, shaking mother, brothers and sister to the core. His death opened wounds, stimulated old pains and made each member face their true self - or at least strive to ask questions and experiment with risk and love.

Six Feet Under ended in 2005 with, in my opinion, one of the most stunning, emotional television endings I've ever seen. For viewers who connected with the lives of these characters throughout the years, and even for the casual viewer, it hit a powerful chord.

Posted by TVBlogster at 9:52 AM

Email ThisBlogThis!Share to TwitterShare to FacebookShare to Pinterest
Labels: Six Feet Under