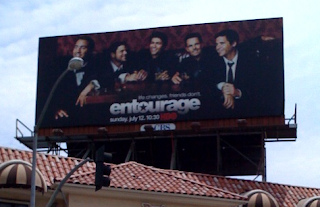 Everyone keeps asking me when the new season of Entourage will begin. I tell them the same thing. "The hell I know." And I call myself a TV Blogger? Yes. I can call myself anything and get away with it since no one pays me (nor reads me) for the work. This is fun time for me. Love to write, but tend to lag on doing the research this time of year. It's Emmy season, yet I have nary a word on the build up to nominations on July 16th. Conan is dealing with shifting Tonight Show demographics, molding a younger audience into the day part, recalibrating advertisers viewership targets. Yet, here I am, waiting for Bruno to be released in theaters and thinking about whether or not I should buy my leased Honda and move to Los Angeles. Call it "too much on the brain" for television writing. Call it the lazy summer whatevers.

Thank the marketing gods at HBO for putting up billboards, because as I left a Starbucks on Sunset a few weeks back, I came upon this giant sign touting Vince and the boys for start up on July 12th at 10:30pm. Forget HBO press releases, websites or trade mags. This is how I get my info - taking shots of advertising with my iPhone and a Grande Americano in my hand.

Entourage is about to embark on its sixth season. Mild Apathy has seeped in here. The show has lost some luster in recent years. The Hollywood Reporter kind of agrees. For me, it's too many gorgeous female extras that make me feel like a thin haired, big boned ogre, and Jeremy Piven's Emmy Award winning scenery eating tantrums have tried my patience a tad too often. Seeing Vince's life come undone in season five added some juice; yet due to his gorgeous countenance and lucky star above, he didn't suffer all that much. Retreating to a tropical island and getting fucked between high and low tide gets really old. Snore....

I think what keeps me holding on is the hilarious pairing of Johnny Drama and Turtle. I also care about Vince and where his career will take him. So, I'm in it for the long haul.
Sports Side note Entourage Vent: What's with the Yankee worship? (Turtle?) These boys are from Queens - not the Bronx. There's no law on baseball allegiance among the NYC boroughs, but Queens is Mets territory. Boys from Queens who love the Yankees can be accused of being front runners, forgoing neighborhood tradition by rooting for the corporate team on the other side, having wins handed to them while boasting of entitlement. Wait a minute. Sounds like the theme of these lucky Bro-mantic guys from Entourage. Touche, Doug Ellin and Mark Wahlberg. Allegory does sneak up on me.
Posted by TVBlogster at 7:00 AM

Email ThisBlogThis!Share to TwitterShare to FacebookShare to Pinterest
Labels: Entourage