The Mighty Boosh Coming to US and DVD 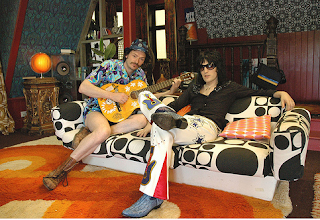 I'm feeling as sparkly as Vince Noir's mirror ball jump suit. The Mighty Boosh, currently airing on Cartoon Net's Adult Swim on Sunday nights at 1am, is set for an American tour to promote the US July 21st release of seasons 1 - 3 on DVD!

To kick off the whirlwind of promotion, Julian Barratt (aka "Howard Moon") and Noel Fielding (aka "Vince Noir") will be appearing on Late Night with Jimmy Fallon Wednesday, July 22nd and on Chelsea Lately on July 27th. They'll be at Comic-Con 2009 in San Diego (July 23rd - 26th) at the Adult Swim booth on July 24th and the BBC America Booth on the 25th. See the full itinerary below for their Comic Con appearances.

During Comic Con, there will be a limited supply of tee shirts (only about 200) available for purchase at the BBC America booth for $17, so move all your ironic tee's to the side of your closet to make room, because here it is. 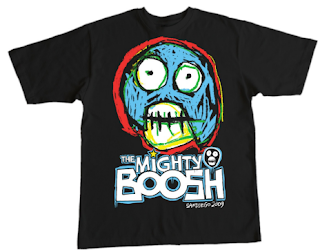 As for the DVDs: The Mighty Boosh Seasons 1 through 3 will each come complete with two discs, packaged with some fun bonus extras. The suggested retail price will be $29.98. Check out the BBC America Shop where they are going for $25.98. Amazon is offering season 1 at $19.99 and seasons 2 and 3 at $24.99. 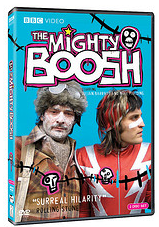 The Mighty Boosh: Season 1: Vince and Howard work at Bob Fossil's (Rich Fulcher) Zooniverse. We are introduced to Naboo the enigmatic Shamen and Bollo the lovable Gorilla.

The Mighty Boosh: Season 2: More epic, mind altering adventures with the fabulous Vince and the jazzy Howard. This is the one with my fave, "The Legend of Old Greg". Pour me a Bailey's. 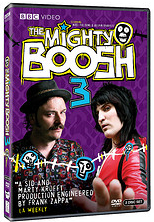 
Watch this space for possible DVD give aways.

Posted by TVBlogster at 7:47 AM

Email ThisBlogThis!Share to TwitterShare to FacebookShare to Pinterest
Labels: The Mighty Boosh