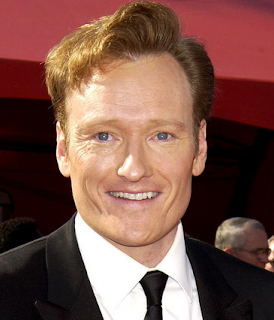 As the countdown to Conan's new show ticks away day by day, the news keeps coming. The biggest non-surprise of the year was made official last week when it was confirmed that Andy Ritcher would join O'Brien as co-host. Today brings another bit of news in the music area. Jimmy Vivino, music associate for Conan's previous show, has been made band leader of 'The Basic Cable Band', formerly the 'Max Weinberg Seven', replacing Weinberg who looked like he took a hike from the Conan bandwagon back in January.

Conan premieres on TBS on November 8th at 11pm.

Source: Hollywood Reporter
Posted by TVBlogster at 10:22 AM