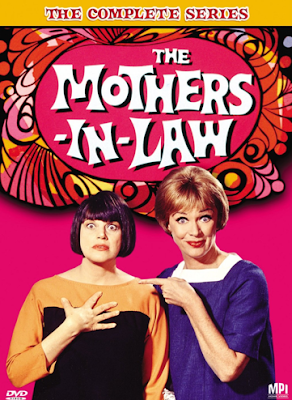 It's retro-TV time. Desi Arnaz produced The Mothers In-Laws back in 1967. Syndicated in the 1970's, a generation may remember this show during sick days home from school (like me). It starred Eve Arden and Kaye Ballard as, well, mother in-laws who sometimes love each other, but also love to get on each other's nerves. It's sort of like a different version of I Love Lucy, if Ethel was an hilarious Italian and Lucy was a blond. The show is the usual 60's version of farce, but it's super fun. Ballard is a scream as Kaye Buell, filled with Italian curses and gestures, her timing is incredible, and Arden is crisp and funny.

The Mothers In-Laws complete series is now on DVD, available at Amazon and available for rent on Netflix.
Posted by TVBlogster at 8:35 PM

Email ThisBlogThis!Share to TwitterShare to FacebookShare to Pinterest
Labels: The Mothers In-Law