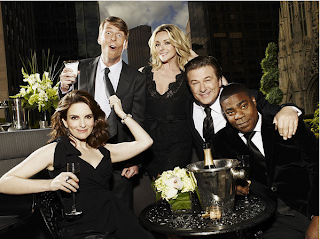 It's a super exciting night for 30 Rock fans. Tina Fey and her crew will be taking the show live tonight. The episode will broadcast from 30 Rockefeller Plaza's SNL studio (Studio 8H), and will offer up a cast of very nervous but capable funny people who will not only be doing the show as live as can be at 8:30pm New York time, but will be doing it all over again for the Mountain and Pacific time zones.

Check out an interview with Executive Producer Robert Carlock at NYTimes.com to get the full behind the scenes vibe on this cool feat. (NYTimes.com)
Posted by TVBlogster at 2:07 PM