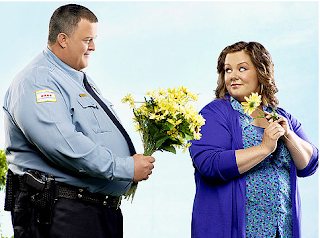 If there was one thing I was concerned about CBS' Mike and Molly, is that the fat jokes were going to fly at the expense of the two lead characters. In fact, there was a moment during the pilot that annoyed me: When Molly's skinny mom (played by Swoozie Kurtz) and her voluptuous sister (played by Katy Mixon) eat up a freshly baked chocolate cake while Molly is sweating it up on an elliptical machine beside them. Here we go, I thought. Skinny people indulging in something the key character of the show cannot have - dessert. But as the pilot continued, and as the past few weeks of Mike and Molly evolved with character development, I've grown to love this show.

Billy Gardell and Melissa McCarthy play Mike and Molly respectively - and respectfully. They both bring an honesty to their characters, are very likable, and you root for them. The writing is funny and the ensemble cast really gels. It's also refreshing to see two key romantic characters look like real people - not impossibly gorgeous, cookie cutter blonds with muscle and perfection to which most people cannot relate.

Email ThisBlogThis!Share to TwitterShare to FacebookShare to Pinterest
Labels: CBS, Mike and Molly