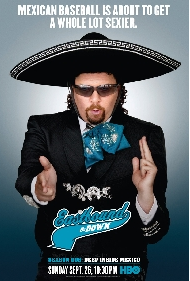 Kenny Powers is probably the most intriguing figure in baseball today - even if he is ficitional. He's a coke filled, philandering, filthy disgusting hard partying former Major League pitcher spending season two of Eastbound and Down as an American in Mexico running away from his horrible and hilarious self. After losing out on the high flying world of cock fighting, he's returned to the pitchers mound on a local Mexican league team to start back on his road to stardom, and to try and win back the love of his life. But...she's moved on. (True. Katy Mixon who played his ex Rachel Buchanon is now on CBS' Mike and Molly). Kenny is one sad ass, but he's pretty bad ass. If you haven't been watching him on HBO after Bored to Death on Sunday nights - you should start. It took me a while to get into his speed, but Danny McBride is pretty spot on funny as Powers.

Eastbound and Down airs Sunday nights at 10:30pm on HBO. Also catch him on the nearest billboard and bus stop bench near you.

Posted by TVBlogster at 5:30 PM

Email ThisBlogThis!Share to TwitterShare to FacebookShare to Pinterest
Labels: Danny McBride, Eastbound and Down