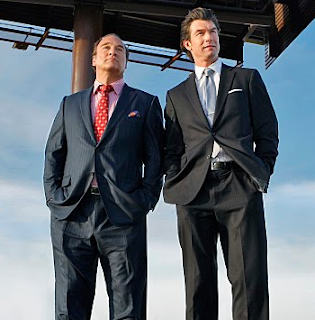 I've been charmed by some shows this fall season (See Mike and Molly), and since my brain is a barren desert of stress, unicorns and daydreams, I'm inspired by some new shows that appear conventional on the surface, but enjoyable when digging in to view.

CBS unveiled their new law drama The Defenders a few weeks back, starring Jim Belushi and Jerry O'Connell as best pals and defense lawyers bending the rules to find justice in the Las Vegas court system. I'll admit, I wasn't expecting much from another law firm drama. Furthermore, although I like the guy, I was never a fan of Belushi's Life According to Jim. Yet, this show reeled me in.

Belushi plays Nick Morelli, a hard working soon-to-be single father who picks impossible lost cause cases to the bone by going beyond the usual legal methods. Alongside him is O'Connell as Pete Kaczmarek, a man with a hot woman in every corner, and is as relentless as his partner in the pursuit of justice at all costs.

Both Belushi and O'Connell have tight, comedic chemistry. The pace is fast, humorous, but dark when it's needs to be. Vegas is the setting, with big time corruption, crime and sex illuminated by the bright lights of the strip. The Defenders is entertaining. Contrived at times? Yes. It's hard not to roll your eyes when the first scene of the first few shows has Kaczmarek with yet another airline stewardess or babe undressing before or getting dressed after a night of humping. Yet, the show is still fun to watch. And I still can't believe the fit, handsome O'Connell was that chubby kid from Stand By Me.

The Defenders on CBS - Wednesdays at 10pm.

Email ThisBlogThis!Share to TwitterShare to FacebookShare to Pinterest
Labels: CBS, The Defenders