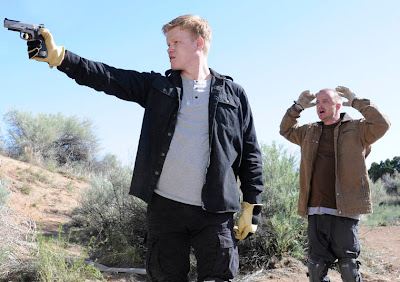 Breaking Bad is killing me. When it's not being absolutely jaw dropping good, it pisses me off.  Why? I want to see Walter dead.  I want Jesse to turn on him, get out from under his thumb. I want to finally see this once hero, now toxic monster drug man, get his comeuppance in such a way, that it will make Gus Fring's death in the nursing home look like an episode of The Golden Girls. (Imagine Sofia as Salamanca ringing that bell.)

One fascinating element of the season so far is the situation Skyler is in . She's now trapped by her own mistakes, living with a monster who is so full of his own danger, that he moves back in without warning, and tells little mind fucking tales to the family to make her seem unstable. Danger is in her home, nipping at the heals of her children to the point where she must bow to his mind games and feign mental illness to get Holly and Walter Jr. out of the house. It's a sad and fascinating character dilemma, having her chose to live with a poisonous force in order to protect  her kids and her own nasty secrets.  This is a riveting stuff.

However, Walter and Jesse's solid track record of getting out of the most impossible scrapes has become extremely frustrating. It's my hope that creator Vince Gilligan is making Walter so invincible that his ultimate fall is mighty. Walt has gone from being a Mr. Nobody to an anti-hero to a toxic asshole. Something has to happen to tear him down, and apparently, as the first scene from this current season shows, Walt is on the run. Something bad has undoubtedly happened. One of his high minded, ridiculously dangerous schemes must have gone awry. Perhaps Jesse cracked, and is after him? Is Hank, the affable brother-in-law and a high member of the DEA, now on his trail? (It's interesting to note that Hank's sudden promotion in the DEA which removed him off the case, is highly suspect. Is there an influential element in his branch that wants him out of the picture? Remember, when he told them that Gus Fring was a drug lord, there was a hint of uneasiness from his colleagues - as if they were protecting Gus by not believing him.)

Masterminding the murder of Fring in last season's finale was masterful and exhilarting. Jesse and Walt hiding in a truck and using the power of magnets to wipe out a computer hard drive containing incriminating evidence inside a building - pretty cool. But robbing a train carrying a giant tankful of methylamine? Come on. The more this man succeeds in doing the improbable, the more it feeds into that monstrous ego of his, and falling flat on the viewers who hate his damn guts. How can you root for a man who is doing horrible things and continues to win the day doing something more horrible?

With the help of Todd, the robbery was a stupid success. But when one little boy on the hunt for tarantula's gets an eyeful of what they did, the final moment may hopefully, somehow, be their undoing.

Because I can't take Walter White and his Heisenberg bullshit anymore.  And you know what? That's a good thing. Gilligan is playing with our emotions, giving us a new lesson in the mythological archetypes of storying telling. A hero doesn't always win us over. A hero may be someone we will ultimately want to see dead.

Having said that, Walt's bad karma needs to show up soon and provide him a barrel full of whup ass.

Posted by TVBlogster at 1:09 PM