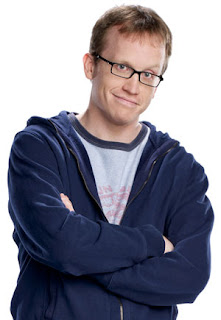 It was bound to happen. IFC has been green lighting off the wall projects from some of the most alternative comedians around, and they won't stop until they drop.  Chris Gethard is the latest to get a series for the cable channel, which is already home to some of the absurdist comedy around (Comedy Bang Bang, Portlandia, Bunk). As per Deadline, IFC's new initiative "Adopt a Comedian" is in full swing.  Created to seek out comedians with the channel's off center style, Chris has been nabbed as their first comedic talent to be brought under their wing.

IFC has ordered a pilot script of Gethard's book, A Bad Idea I'm About To Do: True Tales of Seriously Poor Juedgement and Stunningly Awkward Adventure. In addition, he'll host on-air programming intros and will create original content for IFC.com.

Now if they can only make our Chris fulfull his dream - picking up his public access show The Chris Gethard Show to series. This show is on Manhattan public access cable, and is crazy as Howard Stern and playfully odd like the old Uncle Floyd Show. Chris has mentioned in his blog that if he ever had a five year plan, that fith year would reward him doing that show as his career, even taking it to network.

Looks like that dream could come true, one step at a time.

Posted by TVBlogster at 2:23 PM