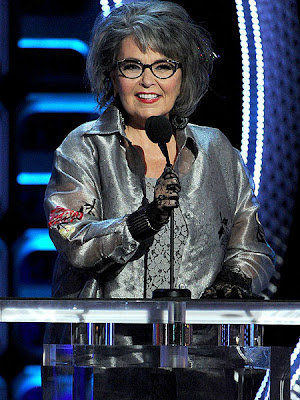 In the pantheon of female comedians who've made a difference in television, Roseanne sits alongside Lucille Ball, Mary Tyler Moore and Carol Burnett as a lady who has made a mark in American Television. But all lady stuff aside, she stands alone as a fine comedian.

Although Barr's so-called uncouth and loud behavior may not have sat well with some members of the entertainment establishment, Roseanne was ground breaking television. Refreshing, honest and hilarious, the Connor family provided a voice for blue collar America, standing as a symbol of the everyman and everywoman who struggle to maintain their sanity while earning just enough to keep a roof over their heads and their kids safe.The writing was sharp and loosely based on Barr's own life as a wife and mother struggling to get by. It also dealt with touchy matters that network television wouldn't touch with a ten foot pole, such as domestic violence, gay rights and infidelity.

Behind the scenes, Barr was met with hard challenges as her personality clashed with others, earning her a reputation of being a queen bitch. But lets face it, as Tina Fey (another groundbreaking funny lady) once said, "Bitches get things done."

The Comedy Central Roast was taped a few weeks ago in Hollywood and was hosted by Jane Lynch. Those who joined in on the jabs were Jeffrey Ross (no stranger to the art of the Roast), Amy Schumer, Anthony Jeselnik, Seth Green, Katey Segal, Ellen Barkin and Carrie Fisher.  In a bittersweet twist, ex-husband Tom Arnold also joined, and apparently behaved, something Roseanne appreciated and trashed regardless.

Speaking of funny ladies getting comedy done, keep your eyes open in 2013 when Amy Schumer's new Comedy Central show premieres. Amy's series will be comprised of single camera shorts featuring an exaggerated version of herself. Knowing her comedy, it will be nuts. Schumer's project includes funny lady Tig Notaro, who will be joining her writing staff in New York.