'The Office' Season 9 Will Be Its Last 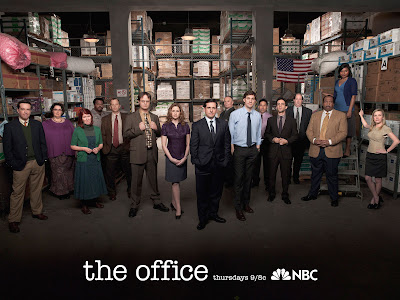 Executive Producer Greg Daniels has announced via conference call that his show The Office will be be wrapping up this coming season. As per Vulture.com, Daniels decided that since everyone will not be back for a season 10, the 9th season "... feels like the last chance to really go out together." Daniels said.

There was talk that The Office was going to reboot; however, as anyone who's loved the show can tell you, that's like restarting a very dead horse. This once wonderful show has been less than stellar in recent years, and to see it go out, with everyone still on staff, and hopefully a guest appearance from Steve Carell (with wife Holly and a baby in tow), would be satisfying.

Also mentioned is that we will FINALLY get to see the so-called documentary makers behind the scenes. My personal wish is that they deconstruct Jim and Pam's history. Every Office blog I've read has wanted to read what Halpert wrote to Pam for the Suprise Santa in season two's "Christmas Party" episode. Perhaps they've give us a peak into Jim's last day in Scranton before he moved to Stamford? There have been so many holes in that relationship viewers like myself are still pondering.

For more info on The Office and all follow ups regarding the final season, go to OfficeTally.com for all your Dunder Mifflin needs.  To read Daniel's announcement - go to Vulture.com.

UPDATE: Jenny Tan from Office Tally comes through will detailed info. For those interested - follow this link.  http://www.officetally.com/the-office-to-end-after-season-9
Posted by TVBlogster at 11:51 AM