Elementary: A Love Letter to the Perfect Sherlock 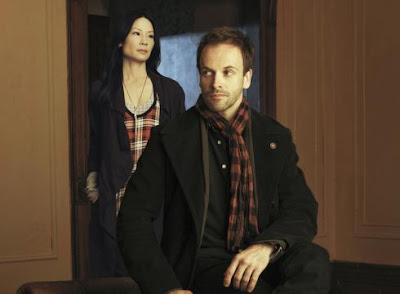 What? Wait a minute.

Okay. I'm taking myself off TV blogger autopilot. When American television starts to tamper with the beauty of Doyle's amazing mastermind Sherlock Holmes, I take umbrage. Yes. Umbrage. It's an outrage. I clutch my pearls and raise my monocle with a sneering eye to you, Sir CBS. 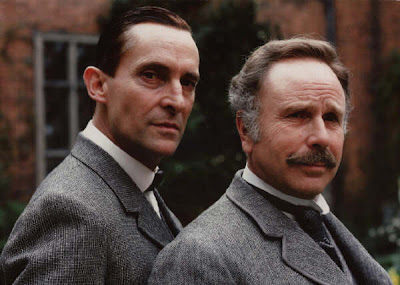 As a long time fan of the Granada Television's The Return of Sherlock Holmes series (1984-1994) starring Jeremy Brett as Holmes and Edward Hardwick as Dr. Watson (originally portrayed by David Burke), any other non-Brett version of Doyle's canon makes me uneasy.

This is the ultimate in buddy stories, and Brett's histrionics in his portrayal of Holmes fit like a velvet glove over the characteristics of this fictional, self made detective. Brett knew how to harness the deep dark vat of mystery that was Holmes. He made him manic depressive, hyper, dark, histrionic, sexually ambivalent, difficult, intelligent, a first rate chameleon. His chemistry with Hardwick was perfection. Indeed, Hardwick portrayed the side kick to Holmes with wit and intelligence. Dapper, father-like, he was the yin to Holmes' yang. An injured veteran of war, he returned to London after fighting in Afghanistan in search of a room where he could convalesce. When he answered an ad for a room at 221b Baker Street,  Holmes befriended him in that prickly way of his, and ultimately grabbed him by the lapel to collaborate on sleuthing 24/7.

The production values of the Granada series was serious business. Much care was taken by the production staff at Granada in bringing Victorian London to life with realistic Baker Street sets, wardrobe, and a romantic, sepia color corrected feel to the project. 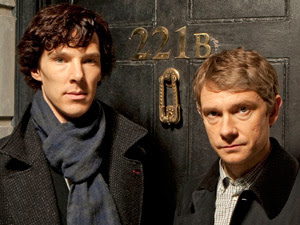 Years went by. Then BBC gave us the wondrous, modern day version, Sherlock, starring the wirey and handsome Benedict Cumberbatch as the Holmes of today, with the lovely, funny Martin Freeman as Dr. Watson.

For a Brett-Sherlock fan such as myself, Cumberbatch as the intense, neurotic wonder boy whose handsome visage and deep darkness also slips on like comfy slippers. His symmetric, sharp features underscores Holmes' genius. One gets the sense that Sherlock is the grown up version of a once petulant child, an outcast, an anti-social wunderkind, most likely met with curiosity and scorn by the boys at Eton or Cambridge. Freeman, who portrays a Watson, also back from Afghanistan, wounded and confused about his next step in life, is the level headed one, the opposite of his stolid partner. He's the human heart to Holmes' ever-thinking brain, as they solve crime with the help of an iPhone and GPS.

The concept of Sherlock and his world can be analogous to Doyle's creature, much like a Shakespearean play. The themes are universal. The players can be beamed down into any period, but the stories, the human emotions and the crimes will never change - just the wardrobe and points of cultural and technological reference differ.

So, why do I claim the Holmes stories can be analogous to today's world, yet bristle over the CBS version?  Because taking one of the greatest buddy stories in two centuries and making one member of that pair a woman, changes the dynamic of what makes Sherlock Holmes terrific. Because making Sherlock a modern day genius wrapped in a GQ-like bad boy, drug addled persona doesn't fly with me. Because the possibility of the same old boring sexual tension that will inevitably happen between Lee and Liu will complicate a good mystery.

I'm sorry. Cannot compute. CBS,with all the writers banging down their door to get a script bought and developed by you, this is what you come up with? A twisted version of Doyle's characters, when the BBC has it covered? I love that you shoot Person of Interest, Unforgettable and the now canceled A Gifted Man in NYC. So, producing Elementary in New York get s a thumbs up from me. But, I'd rather see this drama as a stand alone cop procedural perhaps using the concepts that Doyle wrote in a more self aware way. Why not have the protagonists use their dog eared copies of his books when deducing a crime?  Oh wait. Why would you take advice from a nobody?  Sorry.

What's on tap for mid-season? A modern day version of Downton Abbey? Betty White as the Dowager and Oliver Platt as Bates, set in modern day Los Angeles on a Scientology compound in the Hills?

Oh wait. That may be a good idea.

Posted by TVBlogster at 2:38 PM