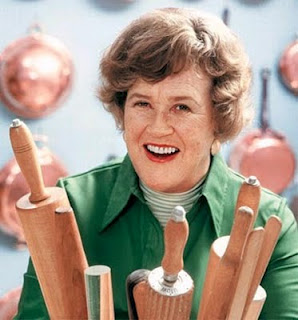 If I could start my life again, I'd live it like Julia Child did. The lady was a firecracker, having dabbled in advertising, journalism and espionage (or so they say). But when she and her husband Paul Child moved to France, this curious housewife discovered the delight of fresh bread, open markets, and delectable meats, igniting her own passion for  a good french recipe. Child wrote a book and eventually kicked off the first popular cooking show The French Chef, which debuted on WGBH Boston in 1963,  that showed American housewives a portal to French cuisine and how to create it without intimidation. With good humor and knowledge, she'd teach viewers and readers alike to stare down that scary rack of lamb or to prepare that souffle with confidence. Child normalized the idea of creating fine cuisine at home because her methods humanized the experience, made it fun, the input imperfect and the output satisfying.

In Nora Ephron's article "Serial Monogamy: My Cookbook Crushes" (The New Yorker, February 2006), her love of Julia was apparent. She  drooled over Child's book Mastering the Art of French Cooking, considering it part of the holy trinity of cook books alongside Craig Claybourne's New York Times Cook Book and Michael Field's Cooking School. Ephron obsessed over these books, creating dishes for high placed friends, with the intent to impress. She'd have imaginary conversations with her icons, and imagined Julia being the nicest because when she dropped food on television, she'd pick it up and put it back in the pan. Even blogger Julia Powell was mesmerized by Julia's work by cooking every recipe in her book and blogging about the results. The work was adapted in the film Julie & Julia.

In her later years, Julia Child continued to appear on PBS, especially with chef Jacques Pepin. She passed away in 2004 just before her 92nd birthday. Today would have been her 100th, and what an amazing centennial it is.