NTSF:SD:SUV: When Ordinary Cops Won't Do 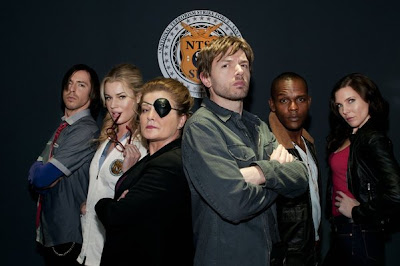 Paul Scheer and his team of funny men and women bring you a world where cops have perpetual five o'clock shadows and lady detectives wear only the coolest of casual pant suits. NTSF: SD:SUV is back, tomorrow night on Adult Swim at 12:15am after Childrens' Hospital.

Now that CSI: Miami is a ghost, David Caruso can shine the shoes of Trent Hauser, a bad ass detective of the National Terrorist Strike Force: San Diego: Special Utility Vehicle.  Along with Trent's crew of special agents, lead by Kove (Kate Mulligrew), the members of the NTSF destroy villains with such fierce skill, Alan Rickman will poop his pants.

What a season it's going to be. Watch this show and be treated to a 21 Jump Street spoof as Trent and Piper go undercover as high school students to capture a kidnapper who abducts bullies. Stick around for Alaskan native Alphonse, an NTSF special agent and former member of NTSF:AK:CANOE team, as  he reconnects with his evil father who places his partners under a spell with large doses of salmon. See cameos by Aubrey Plaza, Ray Liotta, and Jay Johnston. Stick around for Rob Riggle, President of the Navy. I love this show, but from what I've seen, season is going to be even better than season one.

One more time: NTSF:SD:SUV season two premieres Thursday at 12:15am on Adult Swim. Watch it nerds!

Posted by TVBlogster at 4:26 PM