After what seems like a good chunk of my life, the fortnight of sports galore in the lovely land of Britain, has finally come to an end. The closing ceremony of the 2012 Summer Olympics in London took place yesterday, and was a celebration of every mixed tape I ever created back in the 80's and 90's.

I'm not much of an Olympics fan. If you've found your way to this blog looking for commentary on the Fab Five or Michael Phelps, you might have to go back to Google and try again.  The only thing I can offer on the sports side is that Phelps looks like John Krasinski's pumped up sycophantic twin removed at birth, and that Water Polo and Badminton are fun past times at picnics, but why does Olympics allow activities you signed up for in summer camp?
But I did enjoy seeing ladies gymnastics, even though I can't tell you who's who. Also, London did a gorgeous job in both opening and closing ceremonies, my favorite, being last night's extravaganza, what I did see of it.


The word on the majority of twitter feeds seems to be how NBC screwed up the broadcast of the London Olympics. Time zone issues forced them into editing down events and spoiling results. The network did not provide online streaming of real time competition so most viewers had no choice but to tune into disjointed coverage usually paused to view Ryan Seacrest or Bob Costas talking about stuff no one wants to sit and hear . There were too many commercials and NBC prime time promotion interrupted the action, especially last night during the airing of the closing ceremony. 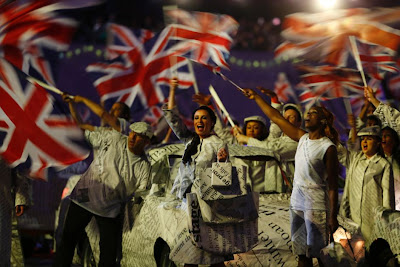 Last night I was in a triple threat of distraction with Breaking Bad blowing my mind in on AMC and the ribaldry of Roseanne Barr's line up of filthy jesters on Comedy Central. However, I did tune into the Closing Ceremony to watch fabulous musical performances marred by poor audio levels and edited bits that left out performances of Kate Bush's "Running Up That Hill", the Kinks, and apparently The Who.

Tributes to British rock shook the house. Russell Brands weird Willy Wonka/Magical Mystery Tour was enlivened by wondrous pyrotechnics and a flourish of psychedelic color as though London was giving the entire world a big LSD trip. Oasis singing 'Wonderwall' was fun because, despite Noel Gallagher's voice sounding rough, I adore the song. Fat Boy Slim doing his medley of dance floor hits on a giant octopus was eccentric and amazing. Then, The Spice Girls came out to tell us what they want what they really really want, when all I really wanted was to see them fall off the roofs of the cabs they were on in cartoon like fashion, unharmed of course. 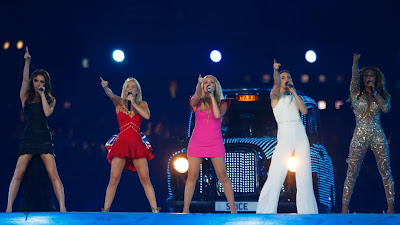 A tribute to David Bowie made my heart race, only to find out that Bowie wasn't actually there  Comedy icon Eric Idle of Monty Python's  rousing rendition of "Always Look on the Bright Side of Life", had the word "shit" bleeped out because hearing that word means Satan will come in the night and steal American souls and then leave the back door open for the nosy neighbors to have sex on our kitchen counter tops.

So absurd, exhilarating and heady, with flashes of happy athletes dancing and celebrating, NBC decided to interrupt this amazing ball of British fun and give the American viewers a fifteen minute sneak peek of their upcoming Fall show Animal Practice followed by local news.

I have nothing against Animal Practice. It's a network comedy that involves a few people on staff that I've enjoyed at The Upright Citizens Brigade. I wish it no harm. In fact, I hope it does well. But I fear that NBC stopping dead in the middle of a celebration to air a preview of a new Fall sitcom pissed off the audience and killed off potential viewers. That's a crying shame. Because if people don't watch this show, they won't see the hilarious and bizarre Betsy Sodaro, or the dry wit of Matt Walsh, two comedians I'd like to see more of on telly (Betsy's a newbie. Matt can be seen in HBO's Veep.) Furthermore, NBC also interrupted competition a few days ago to provide a sneak peak at Matthew Perry's new Fall sitcom, Go On, irking a few viewers.

The British put on a wonderful show for the world to see. It's a shame that NBC doesn't care about viewer's reaction to the quality of the coverage.  Sadly, television networks don't broadcast programming for it's quality, the do it for the money. NBC paid one billion dollars for exclusive U.S. rights to broadcast the Olympics. They are committed to selling ad time, and advertisers want to have their products seen during prime time, meaning NBC has to mold the day's events into truncated, watered down coverage. The BBC, an non commercial entity, provided comprehensive coverage worldwide to those able to access it. This means timezone differences were also in play; yet, their broadcasts are being lauded as the best.

I look forward to the day when more options are available to view the Olympics, sending a message to NBC that the viewers they care so little about can take their eyeballs and money and go elsewhere.

Sources and other bits of interesting reading: