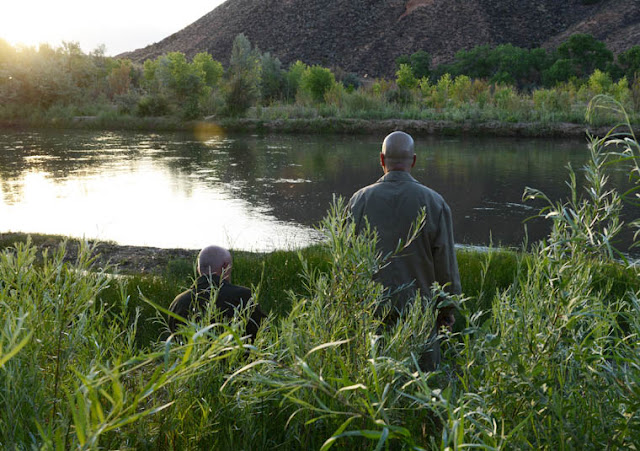 There has been a wind of change in storytelling these days. No Country for Old Men and There Will Be Blood are recent films that have explored the ethos of the anti-hero, the villain we hate to love. We can't help it. In their world, there are monsters far worse, whether it's society baring down, or false profits who try to swindle them.

Mike Ehrmantraut- one of the most intimidating elements on Breaking Bad left this moral coil last Sunday. Walter White killed him. In a few shots, the man we feared, maybe at one point hated, died in peace by a river bed. And it was devastating.

Those who watch the show can atest, Mike was one cold bastard. At least at first glance.  I'm not sure if Mike's backstory has been touched upon, but I don't care. I live by my own theories. In my mind, Mike was a veteran of the Vietnam war. He saw dreadful things that hardened his already hardened ass, cut like a diamond during his childhood on the hard streets of  'bad-side-of-the-tracks USA'. He has the survival instincts of a man who was a prisoner of war. He can take a bullet. Live on the lamb. Disappear if he had to.  After Vietnam he became a cop - a bad cop turned rouge. The kind of cop who would would mingle with evil minds, just to get the truth out of them. The kind of cop who fell in with the worst of the drug cartell, hoping to nab them, but ended up defending them because they gave him money,  money the police force couldn't, money he could save for his grandaughter.  This temptation made him spiral downward into the very thick of the muck.

He was a soldier for drug lord Gustavo Fring. Mike would kill anyone who proved a threat to the king. He had the opportunity to off Walter a few times, but was always talked out of it. Probably because among the immorality within this show, Mike had a modicum of heart. Perhaps that's what makes an antagonist into a villian we can get behind. Heart.  Daniel Plainview in Blood was motivated by greed, but what made us cling to his story? He was a devoted father, until the boy grew up and the truth of his relationship was revealed.  Mike's fatherly respect toward Jesse gave him that human side. Walt thought of himself as a father figure to Jesse, but he screwed with the young man's mind, all to keep him in the clutches of White Inc. Mike had Jesse welfare at heart. He knew he could do better than cook meth. He knew that they all had to get out of this game.

Farewell Mike Ehrmantraut. The DEA is no longer on your tail, and Walter White will no longer nag you into cooking meth.

Special kudos to the amazing Jonathan Banks, an actor supreme, who gave us this intriguing character.
Posted by TVBlogster at 10:30 AM