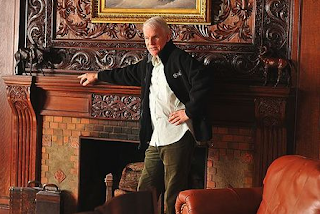 I know. I don't have to keep saying it, but I will: "30 Rock" is the funniest television show on the planet.

This is my mea culpa regarding my own bellyaching on the stunt casting that has been going at Silvercup Studios, thus beaming on our screens. Oprah is a good sport in playing herself playing a thirteen year old that Liz mistakes for Oprah while high on Dr. Spaceman's prescription airplane pills. (Phew!) Jennifer Anniston's appearance, although way too Rachel from my taste, grows on me with each viewing because watching Jack rendered helpless under the sexual powers of Ms. Crazy is hard to resist. Steve Martin's stint as the white collar criminal Gavin Valure was fun, zany, and lovable, making him a perfect fit on this show. (I'd love to see him return in another role). After a slightly stress filled, somewhat disappointing episode of "The Office", seeing Valor tempt Liz Lemon with the pearls of desire any girl would want - eating, staying in and watching TV, internet and sleeping with no major sexual tension involved - was a safe haven, a hilarious relief. Hells bells, Mr. Martin, I'll sign up for the mansion in Connecticut with the Xbox and internet service any day.

Ok, "30 Rock" and NBC. If you're going to do stunt casting right, then you have my blessing. Like that matters, but I'll pretend that it does.
Posted by TVBlogster at 10:17 AM