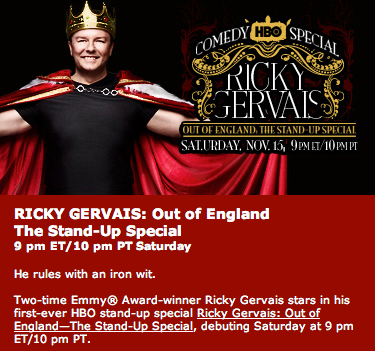 Ricky Gervais has long since taken the U.S. by storm since "The Office" became a cult hit, culminating in the successful American adaptation. With his HBO hit "Extras" further solidifying and raising his stock, the cable network has given Gervais his own stand up special "Out of England". Taped at Madison Square Garden, Ricky gives us Yanks a taste of British perspective. It promises to be hilarious. Gird your loins, America.

Paul Rudd will be hosting Saturday Night Live tonight, and it's about fricking time! He's appeared in classic comedies such as "Anchorman", "The 40 Year Old Virgin" and "Wet Hot American Summer". His current film "Role Model", co-written with David Wain, is already starting to sizzle in the box office. Paul Rudd will strut his comedic chops live tonight.
Here's a taste: 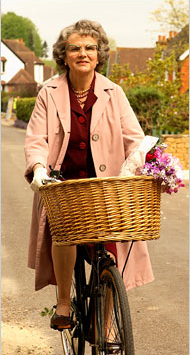 In addition to the witty Ricky Gervais, my anglophile self is looking forward to the BBC/WGBH co-produced film "Filth", airing Sunday night on PBS' Masterpiece Contemporary. It's stars Julie Walters, known for her roles in "Educating Rita","Mamma Mia" and "Harry Potter" among comedy characterizations and stage performances. She portrays the legendary Mary Whitehouse, the grand dame of practical standards of taste and social propriety who in 1963 kicked forth her own crusade against potty mouth and bad form, that lasted through the 1990's. During this long stretch of time, she held the country and government accountable for the bad taste she felt pervaded the British public through television and radio. She became the nation's censor.

In light of the recent scandal at the BBC, where talk show host Jonathan Ross and comedian Russell Brand left abusive comments on a beloved television star's voicemail during a radio broadcast, ending in suspensions and firings of department heads, this film will be interesting. Mary Whitehouse died in 2001. One wonders what she would say about the broadcast standards of today.
Posted by TVBlogster at 9:14 AM