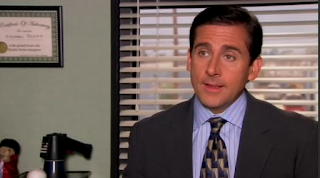 Hurrah and Huzzah! Last night's "Office" entitled "Customer Survey" was like a nice cold drink of soul thirst quenching ice tea in the middle of a hot desert of despair. Everything jelled into what will be entered into "The Office" Episode Hall of Fame next to "The Injury" "The Dundies" and the rest of season two. It's not surprising that Stephen Merchant, co-creator of the British "Office" directed this episode. The tempo was pitch perfect. The writing, lovingly penned by the almighty Lester Lewis,had charm and punch.

This episode had it all: Jim and Dwight combining forces to do battle against the forces of evil, i.e. Kelly Kapur; Jim and Pam on bluetooth phones living their day out live via wireless; Michael acting as normal as Michael Scott can be without being out of character; Andy and Angela picking out wedding venues, only to land on Shrute farms where the barn allows you to see the stars at night while antique farm tools cradle your vision. And there was angst. Good, solid, human angst driven by personal goals between the future Mr. and Mrs. Halpert that will test the marrow of their solid foundation. But oh, art student Alex. 1962 called and they want you back on "Mad Men" where you belong.

Although the love of Jim and Pam prevails in this show, the dynamic between Jim and Dwight rules big time. It's an important part of "The Office" chemistry and vibe. Last night, it was provided joyfully through hilarious sleuthing, sussing out a probable conspiracy that deemed the star salesmen as smug (or smudge) and arrogant to their clients. According to the customer surveys supplied by Kelly, Jim and Dwight's reports were less than impressive.

In fact, according to Michael, they were "poopy". 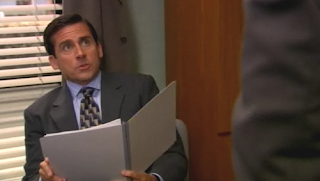 Dwight screams of an in-house conspiracy, channeling an episode of "Lost" and other fantastical television mysteries. He may have a case. There is much riding on this. Dwight's integrity and honor is at stake. For Jim, the bonus is needed to help buy his parents house so they can retire, and he can live happily ever after with Beesly. Aw, Jim. The Scranton hometown boy, planning his life with Pam. Does it have a terrace for her garden? I hope he tells her before he actually makes the purchase, but methinks Miss Pamela will get all weak in the knees at such a gesture.

What transpires between Michael, Jim and Dwight will go down in the history of comedy. When John Krasinski submits his episode for Emmy consideration, this is the one. Michael, the super sonic salesman of his day, sits down the reprimanded salesmen to teach them how to deal with customers. William Buttlicker is born in the form of a Halpert snark to bring levity to the silliness of the situation. Hell, Carell, Wilson and Kras should just collectively submit the scene to NATAS. They'll all nab a trophy for this moment alone. Couple in Dwight's secret and very loud meeting in his dork-mobile with Jim, and you have award winning comedy gold.

Meanwhile,back in the big fancy city, Pam is whispering sweet somethings into Jim's ear all day long: "Cute Shoes"..."I Love You"..."Why did Kelly just leave the break room without torturing you through fifteen minutes of girlie drivel?"... You know, the average things you say when you're on the phone via bluetooth for eight hours straight looking as though you're talking to yourself.

Gratuitous screencaps of Jim and Pam because they are adorable and not in a yucky way... 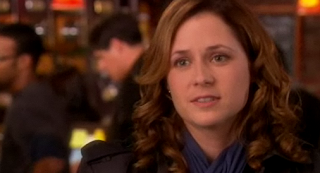 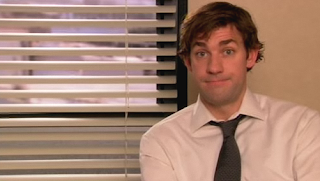 This sets Halpert off on a manhunt to prove that something is fishy in the state of Pennsylvania. Much like the fight against the Taliban, Jim teams up with the enemy to reveal the secrets of an unknown threat. Ryan, who is in the midst of some Oprah type contrition by "living in the moment" inadvertently reminds Jim that Kelly had a party to celebrate the season finale of America's Got Talent, and the parting gift to reward you for the post-Kelly headache you'll have in the morning was this lousy cup. 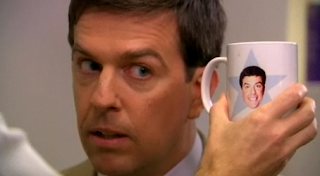 Jim and Dwight, having better things to do like visit Pam in New York, or alphabetize one's "Battlestar Gallactica" DVD collection, didn't attend the party, don't have their own personalize cups, and pissed of little Miss Kelly. Revenge ain't pretty. Yet alas, Jim finds proof that Kapur is the culprit. The impossible happens. Jim tells Dwight his usual man-child illusions were correct. Geeks rule, and the cool boys with floppy hair and messy ties concede. 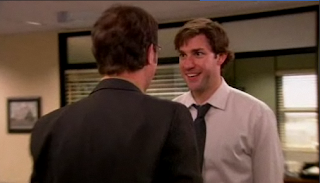 Ok, I know I'm tough on the Andy and Angela story arch, but I will admit that their scenes in trying to find a wedding venue were handled well. They were short, and had the right dose of funny. The tag showed that Dwangela is very much alive, and kudos to that.

What's about to be mentioned next is the painful part. This is where Pam has figure out what to do with her Pratt knowledge and New York City opportunities that could be at her doorstep if only she stayed. Alex, who really should be working on Don Draper to expand his Television Department at Sterling Cooper, appears like a stalker at corporate, luring her with the promise of a Chuck Close cheese party. Jim coo's in her ear that the guy is into her. Yet, Pratt Boy has other plans. Taking her aside, he explains that leaving New York would be a mistake, which places Miss Beesly in a quandry.

Jim hears it all. He's been there with her before. Now someone who's part of the art world she left Scranton to study, is opening the window of thought about her future. Sadly, Alex's talk smacks of ulterior motive. Here we have, yet again, another possible suitor for Pam, which would be exasperating if it was obvious, but it's not. Jim chides her about it, whispers it into her head. But is Alex is just being a friend, or trying to keep her in New York long enough to make her change her mind about marrying Jim? It's frustrating and beautiful all at the same time. Lovely, sweet angst as Pam swims in confusion, knowing Jim knows, not knowing what to say... 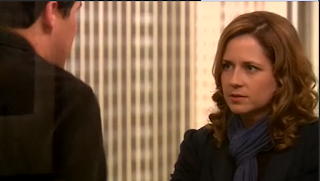 ...as Jim's plans for the future are halted at the thought of him holding her back. 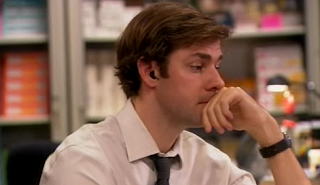 There is much speculation on what will come next. Having seen so many moments of homesickeness on Pam's part in this episode makes it believable that she will be back.

I pose the same question uttered by Alex: What's worse, leaving New York only to wake up in fifty years wondering what might have been? Or waking up in fifty years in New York, not having the career you thought you'd have, stuck in a relationship with another artist who is not Jim, or perhaps divorced, wondering what might have been if you just went back home? Like Dorothy in the "Wizard of Oz". If you want to find happiness and people who love you, you need to look no further than your backyard.

For someone who has struggled in New York for years, I can tell you - the big city brings no guarantees of success, especially in the world of art. The competition is fierce. The money isn't great. The rents are expensive. And there is no way Pam is going to feel one ounce of love for Alex the art student, if indeed, he is setting her up to steal her away - which in a way - I don't really buy.

So rest easy, "Office" fans. Pam might be reeling right now, but as any artist will tell you - art is everywhere. In buildings, in factories, in small iron bound towns, in paper supply companies and schools and places of worship. Art is in a family home provided and cared for in tangent with someone you love and loves you back. No cold city promise is going to guarantee a good life in fifty years from now.

This episode was, in one word, sensational. It had the gut wrenching laughs measured perfectly against the bittersweetness of Jim and Pam.

Wow, great recap! And I'm so in agreement with everything you said about Pam and NY and where art (literally and figuratively) really lies. It kind of bugs me that the writers are painting this picture that either Pam can stay in NY and pursue her dreams or go back to Scranton and effectively give them up. I'm a graphic designer myself and I started my career in a small town, and I currently live in another small town where I've been able to continue it. I've worked in companies and freelanced, so there's no reason Pam can't do it in Scranton. I really believe she'll come back to Scranton and this will make for some meaty issues for Jim and Pam to tackle. To me that's far more interesting story telling than just keeping her in NY (and far less likely to result in a fan riot).

Also, just have to say that I loved your Wizard of Oz reference. It's one of my all time favorite movies, and my home office contains my Oz memorabilia collection and even a yellow brick road painted on the wall. So, yeah, I totally dug that reference. :-)

Thanks, Jamnicity! As you can see from my other comments at TWOP, I like using the Dorothy analogy a lot for Pam in this situation.