SNL: Ben Affleck and John McCain - Votes are In 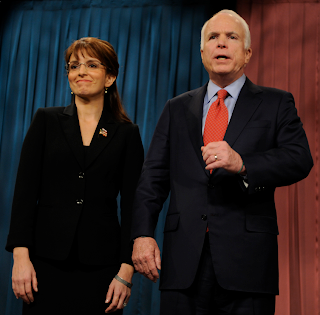 Two days to go after two years of campaigning, stump speeches, negative ads, change, hope, mavericky mavericks, views of Russia and various Joe's of many vocational distinction. Saturday Night Live has taken advantage of their incredible luck in having the comedic platform to make political commentary through satire, while allowing the candidates to join in on a little self deprecation.

John McCain, who hosted SNL in 2002, returned to the show last night to do some fun lovin' good time humor. America did not have to wait. He was in the cold open, joined by Tina Fey doing her Sarah Palin duties. It was pretty funny to see him sell off his campaign themed knick knacks on QVC, while Palin went all rouge with "Palin in 2012" teeshirts for sale on the side. There was actually an amiable vibe on set. The studio audience seemed quite supportive, considering one would expect an east coast Obama supportive contingency. Yet a supportive crowd out cheered what could have been mistaken for boo's. McCain returned during Weekend Update, again to positive applause, this time with definite boo's laced in the applause, good naturally acknowledged by the candidate, before he went on to satirizing his own campaign tactics.

Guest Host Ben Affleck came back as guest. The monologue felt a bit wasted, shortened, and was not a particularly great kick off for the evening's show. Affleck, making note of being a staunch Democrat, commented that he was supporting McCain tonight since all the Democratic presidents he supported in the past lost. Who better than to deal with superstitious reverse karma than a Red Sox fan? This Mets fan totally understood the strategy.

Affleck stretched his impressionist muscles by doing an very angry and out of character Keith Olberman. I know Olberman can be passionate about his convictions, but Affleck seemed to have missed the twinkle firmly planted in Keith's eye - making the Olberman sketch a little more macabre, and perhaps not as pitch perfect as it could have been. Also, the stab at "The View" was a hit and miss. Affleck continued wearing the skin of someone else - this time Alec Baldwin - with deep voice and squinty eye. The problem with the sketch was the lack of finesse in sending up the ladies. In reality, they are louder, talk over each other, and suffer through right wing discourse from Elizabeth Hasselbeck, thus amplifying her to screeching annoyance. The sketch didn't hit the center of what makes right wingnut Bits and her liberal co-hosts so inflammatory.

Personal favorite of the night was the Target lady sketch and Ben as the man that wanted to sex her up. Ben aced the wigger persona, making guy look like a slightly disgusting, but entertaining ass, while Wigg freaked out customers with her overzealous cheer.

Perhaps the fabulous SNL with Jon Hamm last week made it tough for Ben to outdo my expections. This show was fine, but not as top notch. However, he's always great on this show, even if the writing doesn't hold up all the time.


SNL is on a break next week, but returns on Saturday, November 15th with Guest Host Paul Rudd, whom I love so much, that I have married him in my head. He has been my imaginary husband for a few years now, so it will be a treat. Maybe he can get me pretend tickets to his show? 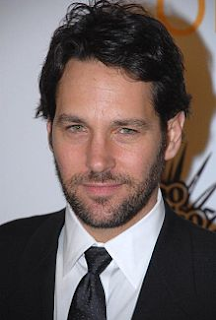 Posted by TVBlogster at 8:47 AM