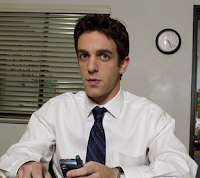 This report came from Entertainment Weekly's Ausiello yesterday, but I just haven't had the heart to post this until now. BJ Novack has asked NBC for a "leave of absence" to work on the new Quentin Terrantino film "Inglorious Bastards". It's likely he will be back on staff to continue writing episodes of "The Office", but it seems the character of Ryan Howard has run its course. Will the position of receptionist be open for the future Mrs. Halpert to return? (Entertainment Weekly: Ausiello Files)

Although I'm saddened to hear the character of Ryan is being phased out, it does make sense. His character has been arrested for fraud against Dunder Mifflin, and bringing him back, even as a temp in a branch office, has been a stretch.

Hopefully BJ will indeed return to work on the writing staff. He was a champion of the show, always enthusiastic about the quality. Whenever an episode bore his name, he was quick to say that every writer was part of that story. The pride he held for each script was inspiring. Although Jen Cellotta, Lester Lewis, Anthony Farrell, Ryah Koh, and the rest of the writing staff are among the best in the business, BJ's talent will be missed if he doesn't return to that writer's room. The show needs him. But for now, lets hope for the best.
Posted by TVBlogster at 12:24 PM

I'm kind of torn about BJ leaving. I was never a huge Ryan fan, and last year he was so douchy I really couldn't stand him. I guess I won't miss Ryan too much, and it's just so unrealistic to keep him working at DM. Although Michael's man-crush has always been funny, and I think what little we've seen of Ryan this season has been funny.

I really hope BJ will come back to do writing, though. I think a big problem with some episodes so far this season, and the very sloppy continuity errors has been the fact that they were written by newer writers. My favorite episodes so far this season (Weight Loss and Customer Survey) were written by Gene&Lee and Lester Lewis, and I think the fact that they're the more seasoned writers shows in those episodes. So, I really hope BJ will keep writing for the show. I know the newbies need their chance, but when they commit such gross oversights (the Hammermill timeline and whether or not Holly was an outside/inside hire) it makes me really keen to have the more experienced writers on the job.

Here's hoping for good things in tonight's episode. I have a cold and could really use the laughs and some good Jam news (fingers crossed).