Cancelation Alert: Pushing Daisies and Dirty Sexy Money to be No More? 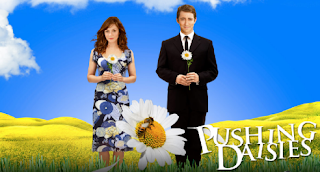 ABC-TV's "Pushing Daisies" has been struggling to survive in the ratings jungle. Earlier this month, the network was giving it two weeks to improve viewership or else it was the morgue for the Lee Pace driven dramedy. The good news is that "Daisies" beat out the miserable "Knight Rider" on NBC. The bad new is that's not saying much since it received the lowest ratings ever. Unsubstantiated rumors are running amok that the hammer has already come down from the ABC Network. Earlier this season I wrote in support of this show. It's a delightful, frothy, sweet (albeit sometimes too sweet) program that should be saved. The fact that "Knight Rider" and "Kath and Kim" are still roaming the earth while "Pushing Daises" is getting chopped is mind boggling. Maybe another network will "touch" it back to life?

Another one to bite the dust?

"Dirty Sexy Money" is also rumored to have been canceled, and not a moment too soon. I cautiously championed this prime time soap-like drama earlier in the season, simply because the cast was substantial in quality despite the tiresome premise concerning the wealthy Darling family and their obnoxious brood. How can you go wrong with Jill Clayburgh, Donald Sutherland, Billy Baldwin and Peter Krause? The answer is - you can, with sub-par writing, boring storylines worthy of "Day of Our Lives" (which is also up for the chop in day time), and sleazy unneccesary tub and shower scenes that make the mind wander toward the DVR line up to see if your machine recorded something better. Unlike the charming "Pushing Daisies" which should be rescued from the
jaws of cancelation, "Dirty Sexy Money" should mercifully be put to rest.