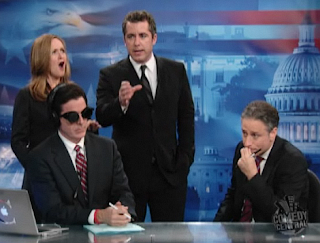 Colbert escapes to his happy place after Obama declared winner.
I don't know what I would have done these last two years of election campaign build up without "The Daily Show" and "The Colbert Report". Their humor decompressed the insanity and anger. The dynamic duo teamed up for special live election coverage, doling out hilarity during a very nervous night. Luckily Obama snagged enough electoral college votes to claim victory just before the show wrapped at 11pm EST, allowing Stewart the spine chilling honor to announce Obama as next the President of the United States. The cheers from the audience were exhilarating.

You can see the coverage in it's entirety at ComedyCentral.com. 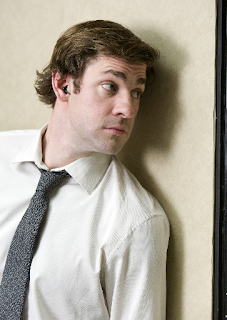 Well, the NBC promo overlords have provided a summary of tomorrow night's episode. Jim and Pam get bluetooths so they can spend every minute together. Why the hell is she still in New York?

Jim and Dwight freak out over the results of a customer survey, which should bring some long awaited Jim and Dwight interaction that's been sorely missing (along with Pam. Did I mention she's still in New York and no one is telling us why?)

Andy and Angela pick a wedding spot. Like I care. Really, I don't.

After my dashed hopes for a splendid season after the sensational "Weight Loss" episode, I'm lukewarm. But I love Jim, and it sounds like a good Halpert episode.

Here's the latest promo that includes some peaks at "30 Rock" where Ms. Winfrey herself will appear. Liz saying "Oprah!" is similar to the way I shout when I see a fresh new batch of cookies.

Although HBO has not yet released scheduling information on "Flight of the Conchords", Jemaine Clement and Brett McKenzie have been filming their second series in New York due to air sometime in 2009.

Photos courtesy of Comedy Central and NBC Universal Media
Posted by TVBlogster at 8:33 AM

Email ThisBlogThis!Share to TwitterShare to FacebookShare to Pinterest
Labels: 30 Rock, Flight of the Conchords, The Colbert Report, The Daily Show, The Office