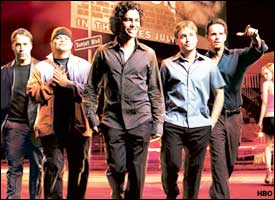 For many a season, "Entourage" was a fun roll in the Hollywood muck, experienced through the world of Vin Chase, his screaming asshole manager Ari Gold, and his posse of boyhood friends from Queens. Mix in his actor brother, Johnny Drama, and you had a sun drenched, glamorous mix of fun loving d-bags gone wild in the land of pretend - where silicon dream babes decorated the background like sexy Christmas garland, and Hummers rolled up to many a hot club. Vin Chase and crew always landed on their feet, that is - until that pesky passion project "Medellin" came to fruition. The film sucked in so many ways, the stench is still being aired out at the Palais in Cannes. It threw Vin into a position he had never been in before: unemployable. His high flying success of the past made him so cocky, bridges were burned from the valley to the other side of the hill. "Medellin" just dug his grave deeper.

I have hardly been able to watch "Entourage" this year because of last year's tired season. It wasn't funny anymore. Vin and the boys were living unbelievable lives. Eric was the only character with smarts and a hard work ethic to sustain him, but Vin's placid reaction to the danger signs in his career was aggravating. His need to be the boy from Queens who won't take bullshit from the establishment cultivated his undoing. Sadly, it was executed in a boring fashion with lack of pathos. Jeremy Piven's character development of Ari Gold held a vibe of self parody, where eating the scenery was a technique. The only saving grace was the put upon assistant Lloyd, whose character has grown strong against the strong hot winds of Ari's big mouth.

Last night's episode entitled "Pie" seemed to have been a return to the "Entourage" of old. Now that Vin Chase's options have dwindled, he's managed to land a film role alongside Jason Patric, who portrays himself as a double "D"-Bag Hollywood B-list star, stealing Chase's lines and setting up some underdog moments for Vin and his friends. Maybe Vin's way back to the top is to work his way back from the bottom. It was heartening to see him in this position. Drama, Turtle, and "E" were back to their humorous selves. You cheered them on. This is an interesting rung of the ladder to witness for the boys. Meanwhile, Ari was out playing the game, this time helping an old agent friend whose finances were derailed by the writer's strike. It was interesting to witness the aftershock of the WGA dispute in the storyline. Also, there was a great back story discussed about early days and how deep their loyalties run as Gold offers to buy his pal's agency - despite his partner Babs disapproval.

The show has already been on for over a month now, so it may be a bit late to weigh in, but last night's episode has encouraged me to go to HBO demand and visit those episodes that sat in my DVR but were never viewed. Maybe the boys are back after all?
Posted by TVBlogster at 9:15 AM

Email ThisBlogThis!Share to TwitterShare to FacebookShare to Pinterest
Labels: Entourage