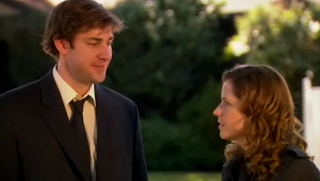 Last night's episode of "The Office", entitled "Frame Toby" gave fans a mixture of "meh" and "wow". Sadly, the show has lost something since season three. The last two episodes, "Customer Survey" and "Business Trip" measured closely to "The Office" of the past, but as a whole thus far this season, the show isn't matching the success of it's first three seasons.

I was satisfied, not enthralled, but satisfied with last night's mixture of Toby's return, Pam's new confidence, Michael and Dwight's silliness in getting Toby arrested, and Jim's lovely, if not risky gesture of buying a new house for Pam as a surprise. It was written by Mindy Kaling and directed by Jason Reitman.

It's the office Brownie Social as the DM'er get their sugar fix on by wolfing down some home baked goodies. 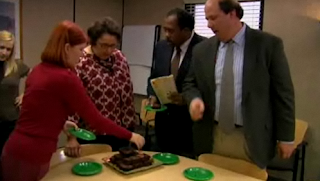 I'm going to pretend that Phyllis baked them since it seems like a very Phyllis thing to do. No doubt they were created with Lady Vance of Vance Refrigeration's mixture of warmth and superiority. After all, her hubby buys her exotic pine smelly perfumes from metropolitan Orlando. Kelly bags two brownies, one for her and one for...Toby? "Yeah", says Michael. You can give that to Toby in Costa Rica" (still doing a jiggy down dance in his head).

Unbeknownst to Michael, Toby has been working in the back office for a week now. Jim spilled the beans. 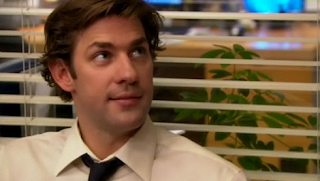 "Good one, Jim. You and your pranks." 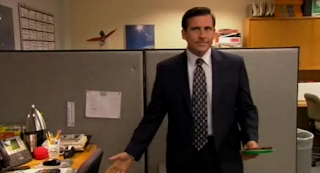 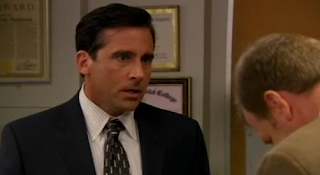 Is there anything more hideous to Michael Scott than seeing the likes of Toby ever again? Probably not. Especially since the lady HR Rep he fell in love with has been transferred only to be replaced by the person she replaced whom Michael hated with a passion that only the Devil can explain.

When one puts Dwight and Michael together for some dastardly doing against Toby, it's like watching children play pretend in your backyard. They devise a plan to oust Toby from his perch by buying some drugs from Lee and Gene....I mean two loading dock guys, who sell him a stash of caprese salad for five hundred dollars. What does Michael know? He once thought he got high because he smoked a cigarette with a girl at an Alicia Keyes concert who wore a lip ring. 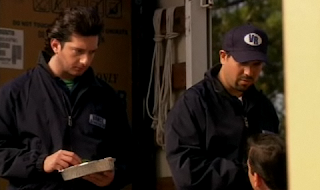 Meanwhile, back in the world where people know reality from fantasy, Pam is disgusted by the filthy microwave. I feel ya, Pam. Office microwaves are a sesspool of exploded Lean Cuisines and fishy smelling left overs the guy down the hall in Graphics heated up two hours ago. She writes an anonymous note letting everyone have it because not cleaning up after oneself is the principle of this whole rant. Everyone thinks the note's obnoxious. Pam stands her ground because three months of New York has made her as bitchy and annoyed as the rest of us New Yorkers.

Jim has other plans brewing...like purchasing his parents home for him and Pam to fill with children and stuff. 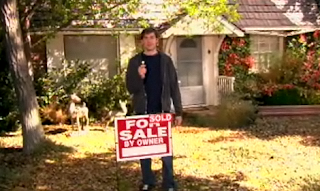 Will Pam like the house? Will she be angry that Jim bought it without her knowing? Will she accept the fake deer in the front yard?

"Surprise, this is your new home", says Jim barely able to gulp down his nerves. 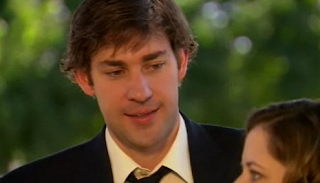 "Here's the hallway...here's the kitchen. The red shag rug can be removed. I paid no brokers fee, and the ugly clown picture has been super glued to the wall." 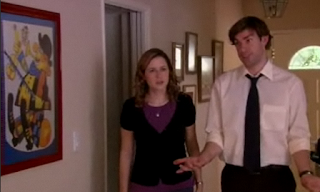 But I thought the garage would make a great art studio for you. 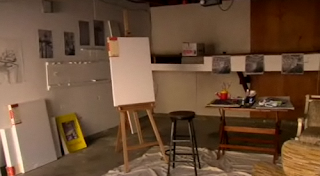 Pam walks around in an emotionless daze, taking it all in. Will she be pissed?

"I know I did this without telling you...I know this house isn't great.." Jim's self confidence melts in a pile of Halpert-ness. 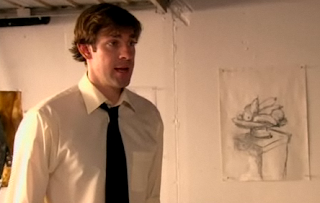 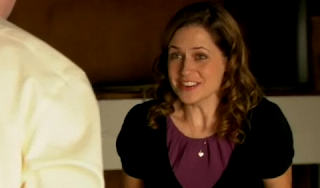 Although this positive outcome was very sweet, it was confusing. I'm glad Pamcake loved the house, but she psyched us out with her placid facial expression as she went from room to room. Jim looked worried enough over her reactions to his decision, and to see him crushed would have been heartbreaking, but something has to give with these two. We don't need angst such as Pam is too fancy for Scranton - we need some vinegar, something that arises from their day to day life that irks their relationship a bit. Please writers. You have to let the happy-go-lucky dove of love slam into the window of anger sometime.

To round things up on this lazy Friday, where I cannot conjure words - only images to recap and review the episode, Toby stays. Michael deals with it. Pam has a new attitude, prominently displayed in the first deleted scene (see below), and the Halperts have a new home fixer up project.

Oh - and Ryan, who has decided to dump Kelly again so he can go to Thailand with some high school students - but not before they have sex one more time and she gives him some money - is still a douche.

Ryan's sudden trip to Thailand is a deus ex machina that seriously failed. His personality change gradually happened over the past year and resulted in a person we don't recognize. Thailand? Is he bailing the country when he's probably on some kind of probation? Creepy and obvious to the behind the scenes situation since Novack is leaving to do a film. Writing out his character in a sloppy manner is bad form, writers.

If this keeps up, I'm going to have to devote more of my blogging time to writing about "30 Rock". Perhaps The Office has run its course? 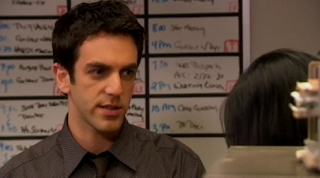 On Tuesday, November 25th, NBC.com will stream a Producers Cut of "The Office: Frame Toby" with scenes unused in the original broadcast last night.

"The Office" returns with a new episode entitled "The Surplus" on December 4th at 9:00pm EST/8:00pm CST on NBC.

Looks like Pam's new found confidence has rubbed Dunder Mifflin-ites the wrong way. I love the spark, but have to say, even as a New Yorker myself, she might want to tone down on the "I've seen and done more things in NY in one week than in Scranton in three months" stuff a bit. Love you Pam, but the folks aren't into that New York superior stuff. And she did kind of burn Jim there. Maybe one day he will gain the confidence to speak up.

Posted by TVBlogster at 9:18 AM