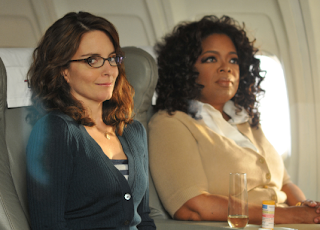 No, Oprah fans. The great lady (and Liz's Valium) is not in tonight's episode. But there is still reason to rejoice! "30 Rock" is back! It seems the new NBC television season began in September and left "30 Rock" behind, wistfully waiting for the last week of October to grace our screens again. Meanwhile, Tina Fey's stock has been rising during the heat of the Sarah Palin election circus, making all those "30 Rock" neophytes wonder what the fuss is about when the damn show isn't even on. Well it's on now!

Tonight's episode was sneak peaked on Hulu and iTunes last week, so the cat's pretty much out of the bag. The premiere is a doozy. Jack emerging from a limo to greet Liz is as much a sight for sore eyes as seeing Don Draper return to Sterling Cooper. All hell breaks loose as Liz tries to impress a baby adoption agency lady, played by Megan Mullally, while Jack, whose been locked up in a room in Washington D.C. with Cooter since the end of last season, returns to NBC and tries to earn his way back up to the top. Will Arnett is back as Devon. "30 Rock" is alive and well.

Now that Tina Fey has entered American's vision in these election times as the master-in-parody look-a-like VP hopeful (and doubtful), perhaps the curiosity factor will make non-viewers tune in and fall in love with this hilarious show.

This season promises to be a star studded one with appearances by Oprah Winfrey, Jennifer Anniston and Steve Martin.

(Photo Courtesy of NBC Universal Media)
Posted by TVBlogster at 6:14 AM